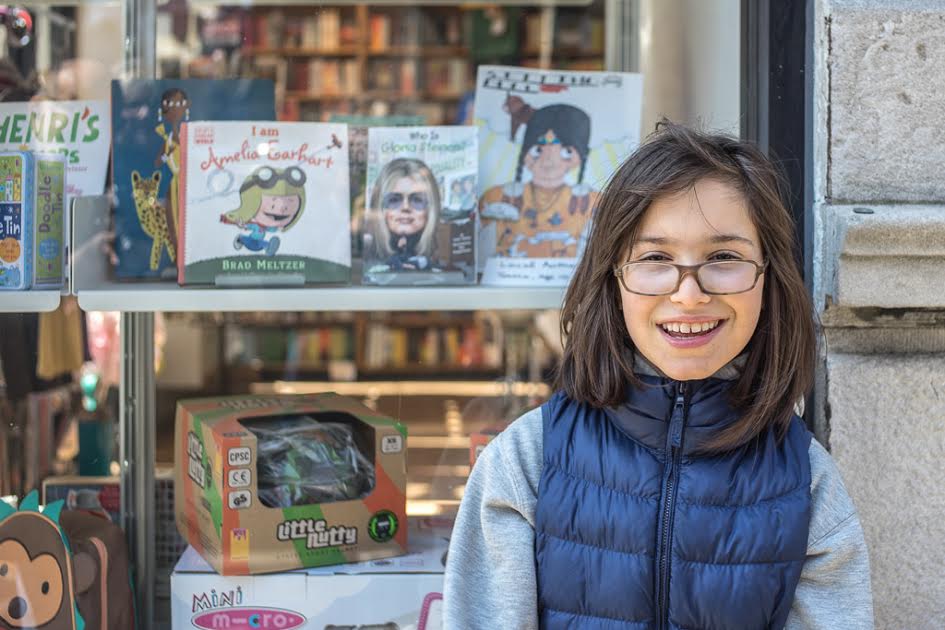 Last Friday, I had the chance to meet with writer Sasha Matthews at our 112th store for an exclusive interview on her debut comic book Sitting Bull: A Life Story.  Sasha Matthews is ten years old, attends fifth grade at a public school on the Upper West Side in Manhattan, and loves reading and writing comic books.  We talked for over a half-hour about how she came to write Sitting Bull, what it is about comic books that inspires her, her influences, and most of all, what she finds surprising and challenging about the comic-book writing process.

In Sitting Bull: A Life Story, Matthews tells the story of the Hunkpapa Lakota chief who led the Lakota tribes to fight against the injustices of the US Government. With vivid and evocative drawings, Matthews not only explores the different perspectives and tensions at the heart of early American history, she also tells an important story of courage and leadership. Mark Fraunfelder, the editor of Boing Boing has praised her work, saying "Incredible! I've seen sample childhood comic book art from great artists (like R. Crumb) and she is better at age 10 than they were." Boing Boing has also done a feature on Sitting Bull, including a full-length showcase of the comic book.  It's clear that Matthews has a strong talent for storytelling--you'll want to see this book in person.  Sitting Bull is available at our Broadway or Columbus stores, and if you can't make it in, you can order a copy on our website. 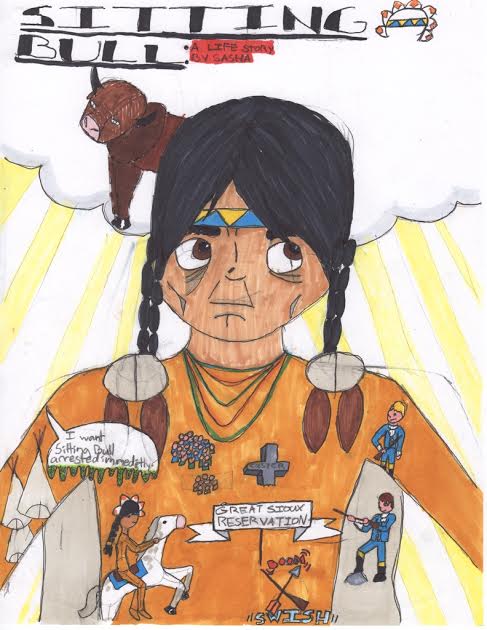 When did you start getting into comics?

I’ve always been interested in comics, but I think I started getting into comics in the third grade when my dad got me an X-Men comic for my birthday.

My first comic that I made was for an extra credit project.  It was a superhero comic.  Originally, the book was going to be mainly about a person who is a plant superhero called Plant Girl who was in an organization of other superheroes—a big superhero network—and her arch nemesis was another super powered person called Scorcher, who got her super powers from radioactivity instead of being born with super powers like Plant Girl. When I started writing the outline for the book I realized it worked better with another superhero called Force, a boy who can make forcefields and can walk through walls.  But Plant Girl was still a side character.

This first book was shorter than Sitting Bull.  It was about six pages and was drawn in pencil.

I really like to read comic books.  They are very entertaining and are usually funnier than regular books.

They really are entertaining and there’s much more you can express using drawings rather than only words—for instance I loved the fight scenes in your book!

My favorite page is the second to last page, which is inspired by many comic books, like Calvin and Hobbes. 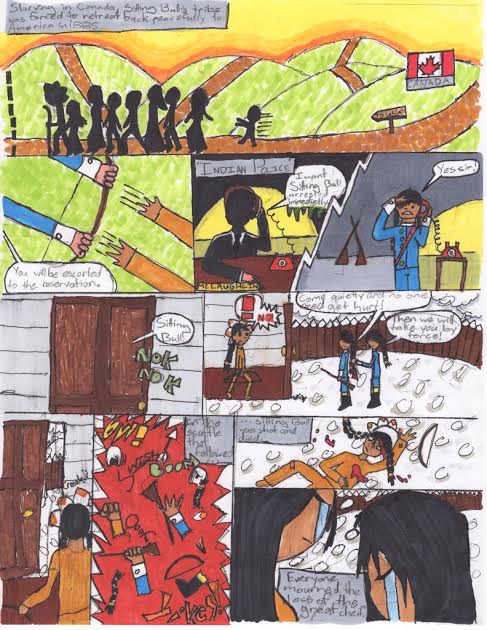 How did you learn about Sitting Bull?

I was going to do another super hero comic and then someone suggested that I do a historical event because that’s easier to write--you don’t have to make something up.  I mean, you still have to paraphrase, but it’s much easier than making up another superhero comic.

I have a big history book and I wanted to do something for school credit and from the time period that we were studying at school.  At the time we were studying Western Expansion going into the Civil War and so I looked through the 1800s and I picked 3 things that interested me:

That’s so cool that you were able to pick one event in history that you found interesting and expand it into the life story of Sitting Bull. Do you remember your first reaction to Sitting Bull’s Story?

My first reaction was that his life was very long—by very long, it was not that long—I think he lived to be 59.  But a lot of injustices happened to him and his family in his life, which I thought was interesting for a book.

Were you surprised by his life story?

I love the scenes where you show him staking out his own ground outside the reservation, the snowy scenes in particular.

The snow is supposed to show that his life was very hard when he left the reservation, but that he did it anyway.

What is your favorite scene from the book?

I have a few…one of my favorite scenes is the third panel on the first page because it describes how before the white people came to America the Native Americans' lives were more peaceful and happier.

Another scene I like is where McLaughlin is telling the Native American agent that he wants to arrest Sitting Bull because it’s very dramatic. 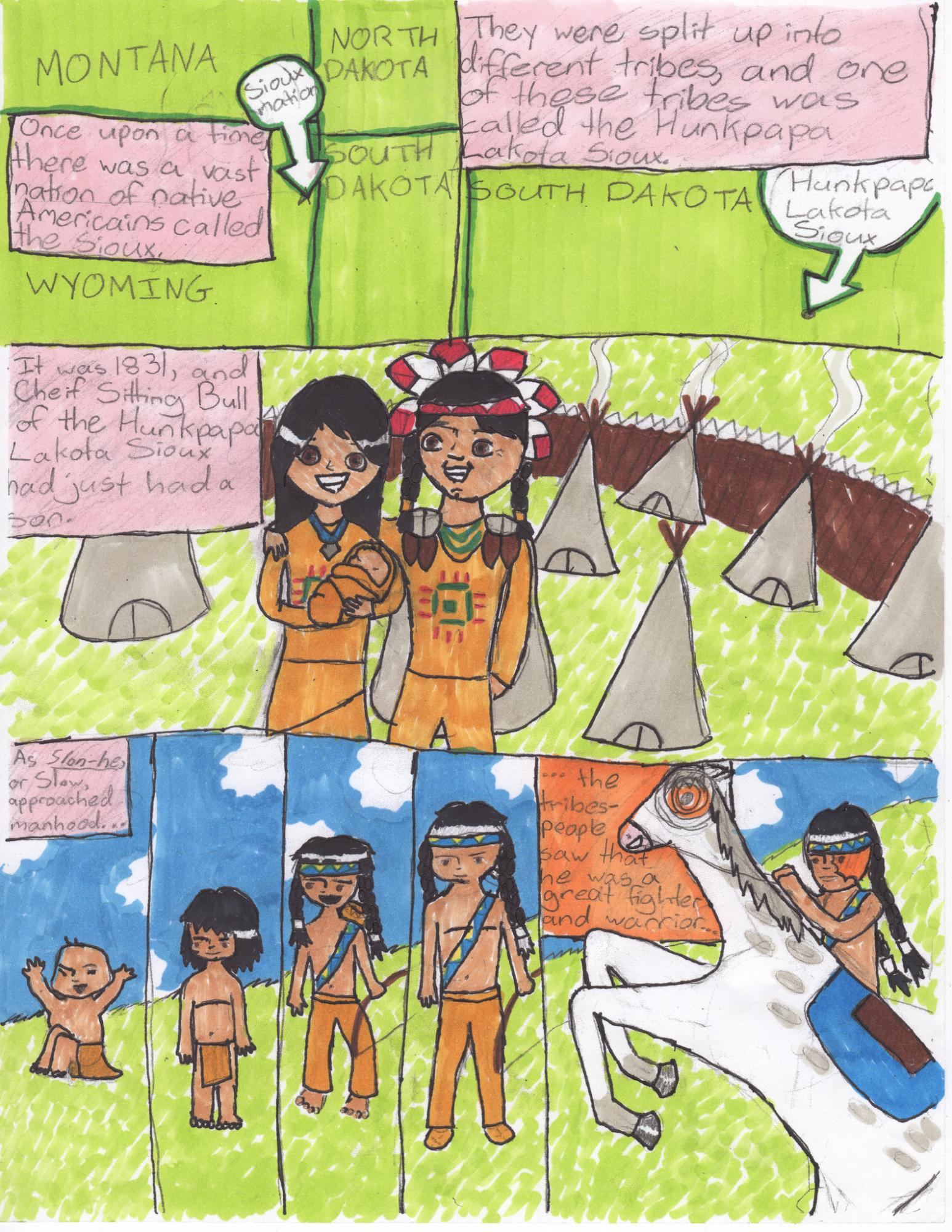 You’ve already had some practice with storytelling before this book, but I was wondering what did you learn about story writing from this project? What was challenging for you?

There were a few challenging things for me: in order to actually write the outline of the story I had to take notes, read the page, reread the page and take notes while rereading the page, and then I had to rewrite the notes in a way so that they could be in a comic outline. That takes a long time.  I thought it would be quicker and easier.

How long did it take to make the book?

It took me less time to make the outline than it did to make the pages themselves.  Maybe it took me about a week to get all the information, but the good thing about it was that I did most of it over winter break so I had a lot of free time.

Were there multiple drafts?

For the last page, yes.  I did a lot of pencil pages because it was hard to describe Sitting Bull’s spirit going up into the sky. So many re-dos.  I was originally thinking of having one huge panel that would take up most of the page and was thinking of making it a large dramatically lit picture of him lying on the funeral pyre with all of his family and followers around it. But then I decided that it would look better as a quiet page because that sort of picture is very dramatic and I wanted it to be a quiet ending to his life.

Have you had your friends read it?

Yes, I presented it in school for extra credit, or what we call “extension work.” Some people present their extension work and some don’t. I first made 28 copies of the book so I could give copies to all the kids in my class. 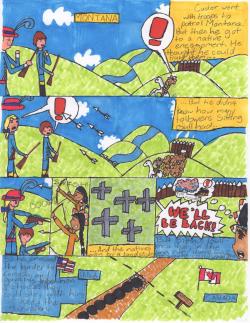 How have people reacted to the book?

How about you? What do you think of the story?

I like it—I think that it’s interesting because it has a lot of hardships for the Native Americans that they’re trying to overcome and they have to do a lot to overcome them, and so the book is very action packed.

What do you hope your readers take away from your book?

If you could go back in time, what questions would you want to ask Sitting Bull?

I would want to ask him something about his family—he had a wife and a daughter and it seems that it would be hard to find time to be with them if he was always out fighting battles against the white armies.

Are you working on any new projects?

I was just looking in the history book and I thought this time I didn’t want to pick something that we are studying in school so I picked Pompeii—I want to know about the history of Mt. Vesuvius, and what life in Pompeii was like before it exploded and what we can find out by digging up Pompeii.

I already took a lot of notes on Pompeii, but when I was researching I went on Google Maps—did you know that if you hold the control key you can look at a place in 3D? I actually went into the hole of Mt. Vesuvius and looked around from inside the volcano!  It looked like a lot of rocks and dust… While I was reading about Vesuvius, I also learned that volcanologists are saying, in their words, “another Vesuvius eruption is imminent...” This is pretty bad since almost three million people currently live near the volcano.

What advice do you have for someone who wants to write a comic book?

I would advise them to have a lot of markers so they can make many different shades and colors. I remember the names of all my pens.  I start with a key and write down, for instance, that grass uses the YG03 pen with Y01 on top of it.  Then the sky uses another pen.  Eventually I just remember the colors and don't have to use the key. 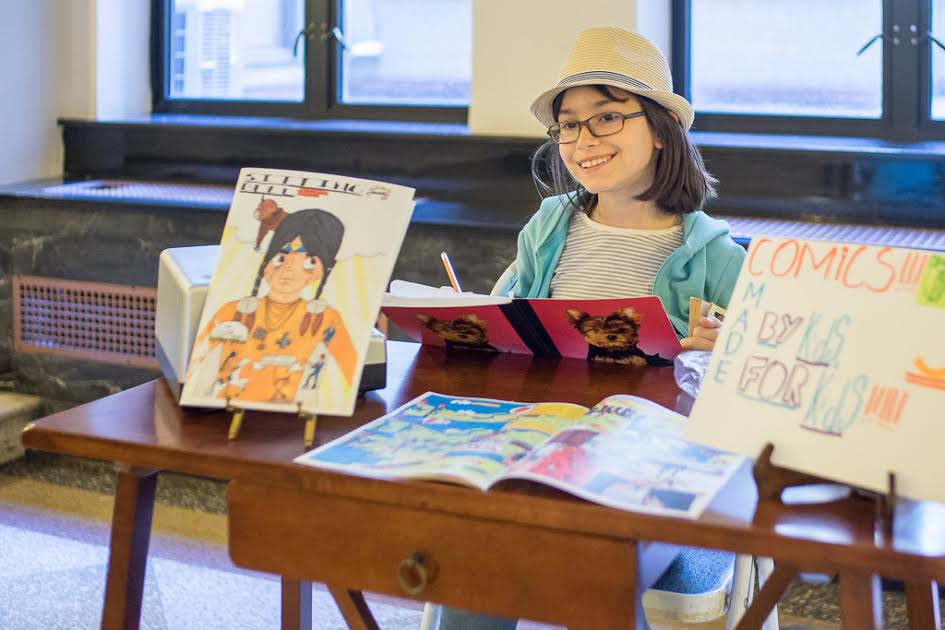