What Would James Bond Read?

Submitted by andrea@bookcult... on Tue, 10/27/2015 - 2:39pm
In anticipation of the upcoming film, Spectre, we started wondering 'WWJBR?'--What would James Bond Read? Of course, it depends on which Bond!  After considering all the actors who've portrayed the famous spy through the years, we've put together a collection of titles to match each 007's exacting specifications.  Exploding pens and Aston Martin not included.
Sean Connery
Ivanhoe by Sir Walter Scott

The oft-forgotten Bond, George Lazenby's version of the famous spy was romantic, melancholy, much like this classic mystery. Set in Lazenby's native Australia, a group of boarding school girls enjoy the eponymous picnic, when three of them suddenly vanish without a trace. Who would their disappearance most remind Lazenby's Bond of--the short-lived Mrs. Bond or his own career?
Sean Connery (again)
The Return of the King by J.R.R. Tolkein

In spite of his uber-manly exterior, I can picture the slightly older Connery-Bond indulging his nerdy side. Bonus Fun Fact: Connery famously turned down the role of Gandalf in the film series because he 'didn't understand' the part.
Roger Moore
The Gun Seller by Hugh Laurie

This hilarious spoof on the spy-genre is almost as goofy as Moore's Bond.  Almost. In The Gun Seller, when Thomas Lang isn't getting smashed on his favorite whiskey or smashed on the head with a Buddha statue, he's jumping out of helicopters and, sometimes, actually doing some spying.
Timothy Dalton
The Year of Lear: Shakespeare in 1606 by James Shapiro

Fun Fact: Timothy Dalton spent the better part of the 1970s with the Royal Shakespeare Company. This new book examining the impact of the tumultuous year of 1606 on some of Shakespeare's best-known works would definitely appeal to the refined side of Dalton's Bond.
Pierce Brosnan
The New Tsar: The Rise and Reign of Vladimir Putin by Steven Lee Myers

The first 007 after the end of the Soviet Union, Brosnan's Bond would undoubtedly be fascinated with the changing political currents in post-Soviet Russia.  This new biography of Putin written by New York Times' former Moscow bureau chief, Steven Lee Myers, paints a vivid portrait of the man whose name is now synonymous with Russian politics; it'd be sure to help Bond catch up on what he's missed since Goldeneye.
Daniel Craig
We Should All Be Feminists by Chimamanda Ngozi Adichie

In the hands of Daniel Craig, who wants us all to remember Bond's "actually a misogynist" whose manners only improve when surrounded "with very strong women who have no problem putting him in his place", Bond might just be ready to pick up this poignant essay by celebrated novelist Chimamanda Ngozi Adichie on the continued importance of feminism today. Maybe. 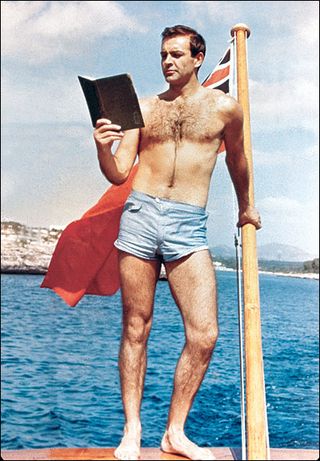