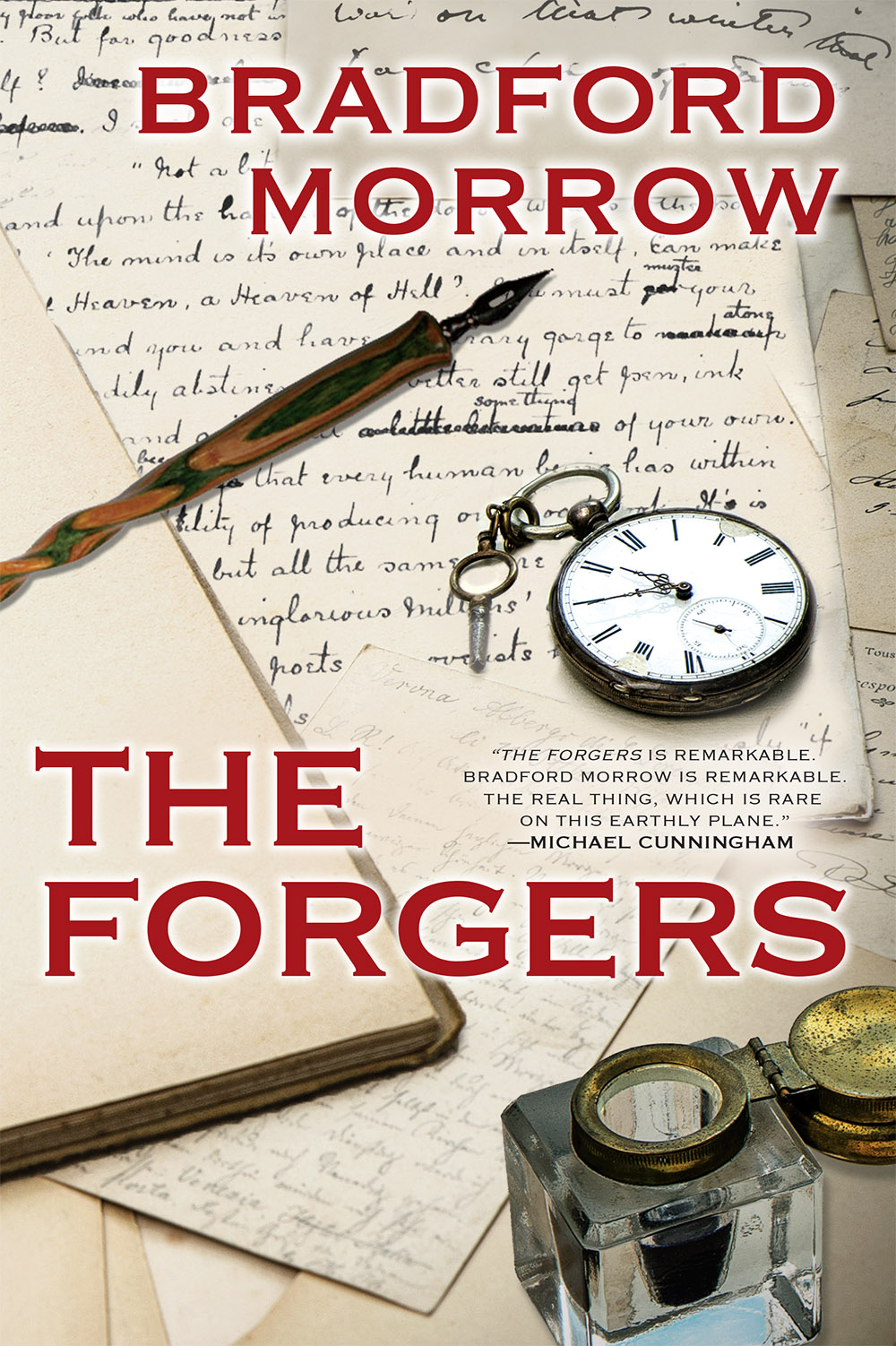 In celebration of the paperback release of The Forgers, we had a chance to interview author Bradford Morrow. He is the author of eight novels and a short story collection. He is the founding editor of Conjunctions and has contributed to many anthologies and journals. A Bard Center Fellow and professor of literature at Bard College, he lives in New York City.

1. How did you come to write The Forgers?

My editor and friend, Otto Penzler, asked if I might write a story for the Bibliomystery Series he publishes at Mysterious Bookshop, a series that had already included works by some of the major practitioners of the mystery genre, Ken Bruen, Nelson DeMille, Anne Perry, and others.  Fine writers but not my usual crowd, to say the least.  When Otto explained that a bibliomystery was simply a narrative that involved both books and a murder, I quipped, “So if a thief kills a librarian by hitting him over the head with a Gutenberg Bible and runs off with it, that’s a bibliomystery.”  Yes, he said, but I know you can do better.  I’d always been fascinated by literary forgery and famous forgers such as Thomas Chatterton and William Ireland, who were so masterful that they fooled the greatest experts of their day, and decided to explore that rarefied world in a contemporary setting.  Having been involved with rare books my entire adult life, it was as if I’d already done most of my research (although I have never knowingly met a forger).  Many themes dear to my heart—the malleability of truth, how blurred the line between good and evil sometimes is, the consequences of obsession—naturally arose as I began writing.  What happened was the story grew into a novella and the novella irrepressibly developed into a novel.  Written at a white-hot pace, The Forgers was finished in a matter of months and was easily one of my most enjoyable writing experiences.  I couldn’t wait to get back to my work table every morning.  By the way, when The Forgers was finished, I did write Otto another bibliomystery for his series, The Nature of My Inheritance, which came out last year.

2.  Of your personal book collection/library, do you have a favorite rare book?

Not one that I could honestly identify as my single favorite, because there are so many I adore and which have interesting individual back stories, almost like old friends. Most serious book collectors, however, have a list of books that they owned and cherished but, for whatever reason, let get away.  As crazy as it might sound, my favorite among those I really lament having let go—and, mind you, this was an embarrassingly long time ago for it still to trouble me—is a 1646 first edition of Sir Thomas Browne’s Pseudodoxia Epidemica: Or, Enquiries into very many Received Tenants and Commonly Presumed Truths, which Examined Prove but Vulgar and Common Errors. Browne’s treatise itself is one of the most hilariously entertaining works I’ve ever read, as its subtitle will suggest, but for me to have read it in its original small folio format, bound in contemporary paneled calf, was like being transported to the mid-seventeenth century. I’ve looked for years for a comparable copy but so far have had no luck. Another favorite in a not dissimilar vein that I do still have from early collecting days is my fifth edition (1710) of Jonathan Swift’s Tale of a Tub, a work of such genius, published anonymously, that Samuel Johnson claimed it was beyond Swift’s talents to have written it.  Anachronistic and eccentric as it may sound, I could easily shelve these books alongside my postmodernist fiction collection and feel quite comfortable.  As for contemporary favorites on my shelves, I have a large collection of books inscribed to me by my writer friends.  Ones by those who have passed on—Kenneth Rexroth, William Burroughs, Chinua Achebe, David Foster Wallace—are almost talismanic to me.

3.  What are you currently reading?
As research for musical details in my next novel I just read Hans-Günter Ottenberg’s biography of C. P. E. Bach, who is a far more influential composer and keyboard theorist than one might think.  Johann Sebastian Bach’s second son, C.P.E. had a profound impact on Haydn, Mozart, and Beethoven.  For fiction, I’m rereading Elizabeth Hand’s amazing collection of stories, Saffron and Brimstone.  I think of her as one of our greatest fantasy writers.  Just finished Joyce Carol Oates’s sly suspense novel, Jack of Spades, and found it to be a persuasive, unnerving glimpse into a life directed by compulsion, jealousy, and flat-out madness—a portrait of a mystery writer as sociopath.  Also, Alexandra Kleeman’s You Too Can Have a Body Like Mine and Andrew Ervin’s Burning Down George Orwell’s House are two original novels I savored and highly recommend.

4.  Is there anything you are particularly looking forward to the publication of?
Yesterday I received a copy of Noy Holland’s debut novel, Bird, which I’m looking forward to, along with my old friend Rick Moody’s Hotels of North America [event at Book Culture on Columbus on November 24th].  Like many, I have read most of Oliver Sacks’ books and so reading his forthcoming collection of essays, Gratitude, reflections on dying, the fate we universally face, will be a bittersweet experience.

5.  What’s next?  Any upcoming book projects in the works that you can tell us about?
I am going through the final draft of my ninth novel, The Prague Sonata, which I’ve been writing on and off for a long time, and plan to hand it over to my agent soon after Thanksgiving.  It’s long, 665 pages currently, so I’m looking to cut wherever possible.
I’ve also been working on a text-music collaboration, A Bestiary, with the legendary guitarist Alex Skolnick, in which we perform two dozen prose poems with astonishingly creative guitar compositions and soundscapes.  We debuted the complete suite at Bard College in October and hope to perform it elsewhere in the near future.  I have several books in mind going forward, one of which might possibly be a continuation of The Forgers, though this one would center on the narrator’s daughter, Nicole.  A collection of essays, Meditations on a Shadow, is in the works as well.