Ed Boland will be here on Wednesday, February 17 at 7pm for a discussion on his new book, The Battle for Room 314. In eager anticipation of the event, we asked Boland to answer a few of our questions ahead of time. Check out our Q&A below and join us in February to hear more about Boland's work!

Until this memoir, I‘d never written a thing in my life. I suppose that tells you how urgently I needed to reflect on my experience as a failed teacher.  What started as a personally cathartic exercise ended up as a very public statement about the children in our schools whose lives are so hobbled by poverty.

Coates' Between the World and Me. I don't remember a book where the personal, the political, and the philosophical all come together so seamlessly. Its conclusions are both damning and haunting.

Also, I am reading Marquez's Love in the Time of Cholera.  How have I not read it until now? Its sense of place and morality is profound.  The line that stays with me most is, “At nightfall, at the oppressive moment of transition, a storm of carnivorous mosquitoes rose out of the swamps, and a tender breath of human shit, warm and sad, stirred the certainty of death in the depths of one's soul.“

Everything That Rises Must Converge by Flannery O’Connor. I started reading her short stories in college and was just astonished. I remember thinking that the characters were -- at once -- so completely familiar and utterly alien. I found out how early she died and how relatively small her body of work was. So after I read the first few, I only allowed myself to read one short story of hers a year.

Whatever Jennifer Egan is squirreled away in Brooklyn writing right now.

5. What’s next? Any upcoming book projects in the works that you can tell us about?

I am noodling around my next project, Tales From Smugtown. It will be a collection of coming-of-age short stories or mini memoirs set in the upstate New York of my youth.

Synopsis: In a fit of idealism, Ed Boland left a twenty-year career as a non-profit executive to teach in a tough New York City public high school. But his hopes quickly collided headlong with the appalling reality of his students' lives and a hobbled education system unable to help them: Freddy runs a drug ring for his incarcerated brother; Nee-cole is homeschooled on the subway by her brilliant homeless mother; and Byron's Ivy League dream is dashed because he is undocumented. In the end, Boland isn't hoisted on his students' shoulders and no one passes AP anything. This is no urban fairy tale of at-risk kids saved by a Hollywood hero, but a searing indictment of schools that claim to be progressive but still fail their students. Told with compassion, humor, and a keen eye, Boland's story is sure to ignite debate about the future of American education and attempts to reform it.

Ed Boland has dedicated his entire professional life to nonprofit causes, predominantly educational institutions, as a fundraiser and communications expert. Boland was an admissions officer at his alma mater, Fordham University, and later at Yale, and lived in China as a Princeton in Asia Fellow. He lives in New York with his husband. 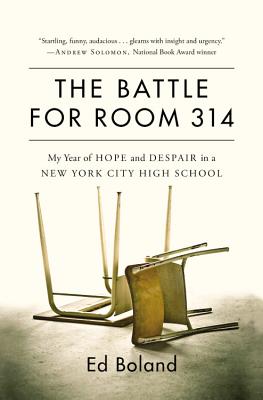 Tags:
Book Culture on Columbus
Book Talk
Events
Q & A
What are you reading?