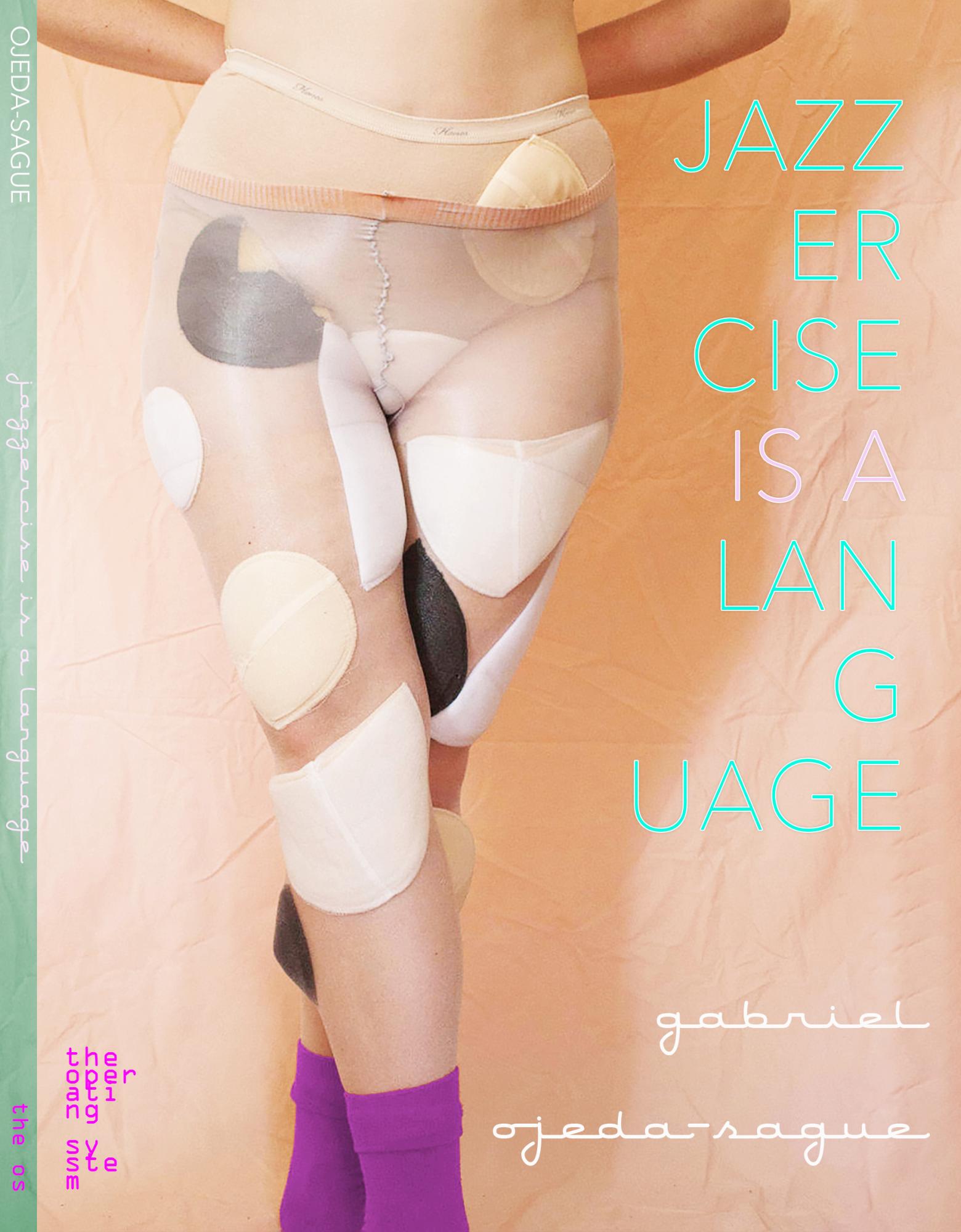 April is National Poetry Month, and Book Culture is excited to showcase some of our favorite books and poets. Many of these come from small presses, who are publishing some of the most exciting work right now. Gabriel Ojeda-Sague's new book Jazzercise is a Language, was just published by The Operating System, a small press based out of Brooklyn. Jazzercise is a Language (JIAL) is a brilliant and funny look at the excercise craze of the 80's through poetic experimentation. Gabriel Ojeda-Sague is a Miami <-> Philly gay, Latino Leo living in Philadelphia, PA. He is the author of the poetry books Jazzercise is a Language (The Operating System, 2018) and Oil and Candle (Timeless, Infinite Light, 2016). He is also the author of chapbooks on gay sex, Cher, the Legend of Zelda, and anxious bilingualism. His third book Losing Miami, on the potential sinking of Miami due to climate change and sea level rise, is forthcoming from Civil Coping Mechanisms.

For the Book Culture blog, Gabriel answered a few questions about Jazzercise, language, and books! Read the conversation below:

1. What was the research like for this book? You talk a lot about watching Jazzercise tapes, but did you go to any classes?

Part of me wishes I went to the classes (they do seem like fun!), but part of me is more confident in saying that the book is not so interested in the lived class-taker, but the at-home spectator. I’m interested in the gym inside your home. I stage a lot of the book’s “action” within the dance studio, where classes like these take place, but it’s not based on any of my personal experience. My admission is, I’m a terrible dancer, I never exercise, and I’m really just not a very physical person. So maybe I just felt safer doing my research in the ways I knew best, watching, reading, listening.

I had a very defined reading list for research, as the book mentions, but that reading list also included readings for style that had nothing to do with Jazzercise. For example, reading Sade Murphy’s Dream Machine was more so that I could study someone who writes prose poetry blocks with intricate internal architectures, which is what I wanted to accomplish in the first section of JIAL. I also read a lot of more mainstream, non-academic articles about Jazzercise. The one that is most openly referenced in the book is this article on Judi Sheppard Missett’s house called “The House that Jazzercise Built.”

2. At points, it feels like Jazzercise is a Language is actually structured like an exercise routine. For example, it starts with these short page-length stanzas that gradually get longer and more intricate, until you have this long, endurance run-on poem that closes out the book (at least this is how I imagine exercise works). How are language, bodies, and movements interacting in these poems?

This is a book about “fitting in,” in many, many ways. Fitting in to a group of people, fitting in to a larger society or demographic, the fit of your body within your clothes, how fit, physically, you are or are not. It’s about “body politics” in a general sense, starting from weight/fitness and moving out to race, gender, etc. Rather than thinking of the poem being structured like an exercise routine, which might be true, I thought of its section as each having its own fit. Each of the three sections having a visual structure they’d have to fit (prose blocks, then crescents, then a long justified stream), semantic rules they’d have to fit into, internal architectures that would shape them. I wanted to make the poems “fit,” in sometimes cruel and unusual ways. So that the poem itself is being exercised/exorcised. In a way, you are right that the poem is like an exercise routine itself, but that gets played around with. I make references to the routine, but quickly move away from it, or I say “Last one!” to start a prose block, when there are many more to go. Or there are fake-outs, like how the last section eventually transcribes a part of Judi’s speech at the end of a video, saying something like “we’ve had a great session everybody!” that sounds conclusive, but then the poem keeps going, if even for just an aberrant few lines.

3. On social media, I've seen some great pictures of your launch events, where you're decked out in full Jazzercise attire. How do you view the relationship between your written poetry and the performed reading of it?

Yes! When I have the time (and, most importantly, the energy) I like to get in Jazzerciser drag and lip-sync a section of video. It’s a way of setting the mood before the reading. I want it to bring people’s attention through the humor and fun of it, and once its done, and their attention still with me, we can together do some of the more serious work that occurs in the text of the book. With JIAL, I wanted to take Jazzercise very seriously, but I did not want to suck the campy fun out of it. With writing about “low culture,” analysis can often be done in a way that kills the very enjoyment we get out of the “low culture” piece (I can’t tell you how much scholarship about video games I’ve read that feel like the author just hates video games). So in taking Jazzercise seriously, I also wanted to lean into what makes Jazzercise so attractive and fun and bubbly in the first place. That’s the power of camp, you can make fun of something while taking it seriously and sincerely.

Recently, I’ve been rethinking this performance because it seems like it can sometimes take people away from the writing. Once, after my NYC launch, a woman came up to me and said “I love what you do! And actually, the writing is pretty good too.” And I just smiled and said thank you, but what I thought was “the writing IS what I do! The other stuff is just a bit of fun.” So I’m having a few internal conversations with myself about the benefits and losses of the performance.

I think of the performance of the poetry as just an instance of the poem. This implies, of course, that the written version is also just an instance of the poem. I’m okay with that. I worked as a sound technician at Kelly Writers House for about four years, so I have heard hundreds, maybe even thousands of readings. My work is very influenced by sound and by the lived communities of poets that organize around readings. So they are essential to me. But they are not any more or less important than the written.

4. I'm also fascinated by the way your book sort of queers Jazzercise, which I kind of imagine as this terrible relic of late twentieth-century domesticity. On one hand, you critique the whiteness that jazzercise brings with it, but on the other, you write about moments of domesticity almost with tenderness. How do you walk the line between these two, sometimes conflicting, desires in the poetry?

Well, I tried to latch this conflict onto myself. So, what is it like when I, a latino gay sort-of male, bring the dream of white womanhood into my home, play it on my TV or on my computer, and model myself after it. When Judi says “follow me!,” can I? Judi’s style of rhetoric, which really dominates the exercise video market after her, is one where she is asking you to be her mirror (“do what I do!”) in the hopes that you will eventually begin to see yourself in her. Be like me until you realize that I’m like you. I was interested in how mismatched me and Judi were, how I didn’t fit at all into her language and program. If I had made this book about Richard Simmons brand, which heralded a faux-utopian openness about bodies, gender, race, etc. it would be a very different book. Or if I had made it about Jane Fonda’s brand, which is similar to Judi’s but more intensive and less hyper-affirmative it would have been different too.

Judi is very aware of your house as the space your exercise is in. She has little quips about it (“are you doing this in your garden?”, “make sure you’ve got room!”) and so the video presumes being invited into your home. I thought it would be interesting to think of it as a contagion or a virus, that I’ve brought into my home and now will change the way my home looks. So my hardwood floor becomes a dance studio, my lamps become studio lights, etc.

I thought the only way to really deal with the complicated politics I saw in Jazzercise was to put it on myself. That’s a territory I know very well. And plus, it gave me the unique angle of spectatorship, which is such a fitting thing for this medium.

5. What are you reading right now? What's exciting to you?

Well, as you know, I’m starting a PhD program this fall, so I’ve got a few lists of books I want to read before that starts. Some are to prepare for it, some are just books I don’t think I’ll have time for once I’m deep in it. The most grad school-y book I’m reading right now is Possession by A.S. Byatt, which is a hyper-romanticized portrayal of scholarship. It’s very optimistic about what literary scholarship can be. It’s…kind of a mess. It’s got a very questionable portrayal of lesbian-feminist scholarship, for one. But it’s so damn well crafted that I can’t help but be impressed with it at every turn. Other than that, I’m reading some old Burning Deck titles, since they are dissolving, Sianne Ngai’s books, erica lewis’s mary wants to be a superwoman, and I’ve been in a kind of year-long process of reading more Mei-Mei Berssenbrugge books. She’s one of my super favorites.

6. Any future projects that you can tell us about?

Yes! The next big thing is my third book Losing Miami, which is a bilingual book of poetry about the possibility of Miami sinking due to climate change. That book is coming out in 2019 with Civil Coping Mechanisms as part of their #RECURRENT series and I’m very, very excited. It’s certainly a challenging and strange book; I’m a little unsure how much people will like it! And it’s so different from my earlier work. But it’s what I honestly could best say about the impossibly large grief I feel in thinking about the future of my home city.

Be sure to pick up a copy of Jazzercise is a Language and keep an eye out for Gabriel's next book Losing Miami, out next year! Keep following the Book Culture blog for more National Poetry Month-related posts!

Jazzercise Is a Language (Paperback)

Mary Wants to Be a Superwoman (Paperback)