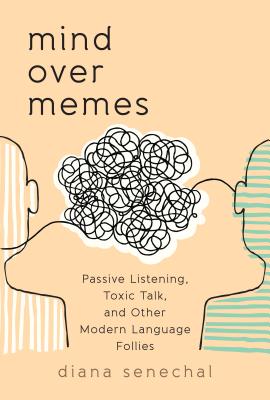 In anticipation of her event on February 22nd at our 112th street location, we talked with Diana Senechal about her newest work Mind Over Memes.  Read her Q&A on our blog!

Diana Senechal is an educator and author whose writing has appeared in The New Republic, Education Week, American Educator, and The New York Times. Senechal is the 2011 winner of the Hiett Prize and the author of Republic of Noise: The Loss of Solitude in Schools and Culture (Rowman & Littlefield Education, 2012), which was a Choice Outstanding Academic title.  She now teaches at the Varga Katalin Gimnázium in Szolnok, Hungary.

1) How did you come to write Mind over Memes?

It came out of two things: my own restlessness with language and an assignment I gave my students. I was dissatisfied with the language I heard around me every day: in education, on the news, and in daily life. Not only do buzzwords abound, but old, layered words have been flattened. I wanted to do, in longer form, what I had my students do for an assignment at Columbia Secondary School: choose a word or phrase that they thought had been misused and overused and then, in three paragraphs, explain the problem and propose alternatives. Their responses were so witty and thoughtful that I saw reason to continue in this vein (with different words and at greater length).

2) What was one surprising history you learned about one of the memes you cover in your book?

I found some hidden gems. For instance, when looking into clichés pertaining to change, I unearthed (online) a delightful article by the scholars Andrew Sturdy and Christopher Grey on the relation between change and stability. To upend the notion that we live in times of "unprecedented change," they wrote a paragraph to that effect but replaced "change" with "stability" ("We live in a world of unprecedented stability. Technology continues to shape how we communicate, travel, work and live....") It rings true and strange at once.

I have favorites of different kinds. Ancient favorites include Kohelet (Ecclesiastes) and Homer's Odyssey. A contemporary favorite is The Melancholy of Resistance by László Krasznahorkai, translated by George Szirtes. His sentences hold so much world and wit that I want to read them over and over. He has something in common with Nikolai Gogol, a long-term favorite of mine. I have my students read Gogol's "Nose" as a matter of course.

4) What are you currently reading?

I am reading poems in Hungarian (slowly, with a dictionary) and rereading Chekhov's long story "The Duel" in Russian. In addition, I am constantly reading materials that I intend to introduce to my students: poems, essays, speeches, plays, philosophical works. As for books, I look forward to delving into Cynthia Haven's biography of René Girard and Langdon Hammer's biography of James Merrill, among other things. Speaking of Merrill, I have been hankering to reread The Changing Light at Sandover. It has one of my favorite opening (and ending) words: "Admittedly."

I am starting to think about the next book. At first I thought it would be about Hungary, but I think I would need much more knowledge of the country and language than I will amass in the next two years. I have been toying with the topic of American vagueness--but I'll stay vague about that for now. (I like to write at least a full draft of a book before talking about it). In any case, I am playing with possibilities.