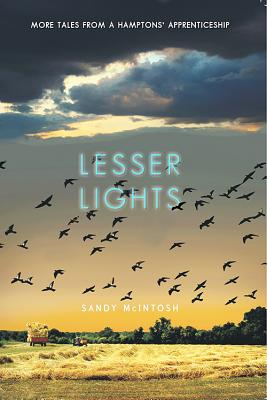 On May 9th at Book Culture on Columbus we are honored to welcome Sandy McIntosh and Mary Mackey for a reading with Harper's Magazine and Marsh Hawk Press.  Leading up to the event we were able to talk with Sandy McIntosh about his work, inspirations, and future projects - check out the interview below!

How did you come to write Lesser Lights?

When I was twelve years old, I was sent up the Hudson River to the New York Military Academy. I was there for six years. Instead of the military life that I abhorred, I spent much of my sentence in the library reading—reading anything odd, arcane, and outside the limited glimpses of literature that a military school curriculum allowed.  In short, I hid myself in the darkest, most remote of intellectual caves for those years. In an alien world, my aim was to educate myself as a poet, to survive.

To my great good fortune, after graduation, I found myself enrolled at Southampton College, in Eastern Long Island. Like every college, Southampton looked to form a pool of part-time professors who lived locally to supplement the smaller full-time staff. But, unlike most every college in the country, Southampton was able to hire the local artists and writers, who—the Hamptons being the Hamptons—were often the best in the world. For instance, Willem de Kooning lectured on elementary painting. Ilya Bolotowky, the neo-plasticist painter, with his huge mustache and thick Russian accent, taught my Freshman English class. The Bollingen-prize poet David Ignatow taught creative writing, as did the poet, playwright and translator, H. R. Hays. I had encounters with writers such as Truman Capote and Norman Mailer. During those college years and for decades after, I was privileged to apprentice with many of them. I was not only their student, but their chauffeur, gardener, even informal psychologist, and their friend. My two memoirs, A Hole in the Ocean: A Hamptons’ Apprenticeship, and the newly published Lesser Lights: More Tales from a Hamptons’ Apprenticeship tell their stories and my own.

I’ve lately become intrigued with France and am enjoying two books that give great insight into the food and thinking of the French: Mastering the Art of French Eating, by Ann Mah, and The Bonjour Effect, by Julie Barlow and Jean-Benoit Nadeau. I am often a truly self-indulgent reader and re-reader. Currently I’m going through every one of Rex Stout’s Nero Wolfe novels for the umpteenth time.

Biographies and autobiographies of writers have always been closest to my heart. Early in my writing, during a trip to England when I was fourteen, I found an old, tattered Penguin edition of P.G. Wodehouse’s letters, Performing Flea. I was amazed to discover the “secrets” of a writer’s life there. From this and other books like it, I gathered the touchstones that have marked the path of my writing and thought for most of my life.

My shanghaied journey through military school was ordered by my father and abetted by Donald Trump’s father, Fred. Those six years were anything but fun. However, I did get to know Donald between ages thirteen and eighteen. Unlike him, I lacked the basic will to succeed as a cadet. I did not look resplendent in a uniform. I was not a great athlete. And unlike Donald, I had no desire to lead every parade. But I did observe how his father’s money finagled Donald’s way to undeserved awards. Recently, I’ve written Op-eds about some of this in The Daily Beast, The New York Daily News, Salon, and elsewhere, and have been interviewed in fourteen national and international television documentaries. A memoir of those days, telling the story more fully, will be a different sort of task for me, but I think it will be worthwhile—even a public service. In any case, I intend to soldier through it.

Mastering the Art of French Eating: From Paris Bistros to Farmhouse Kitchens, Lessons in Food and Love (Paperback)