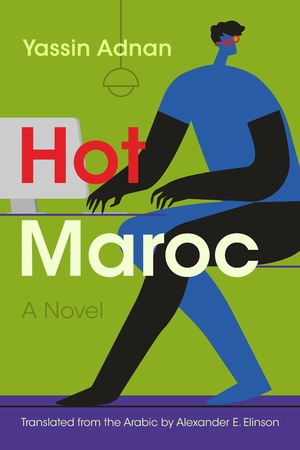 This week we had the great opportunity to chat with writer and translator Alexander Elinson whose newest translation, of Yassin Adnan's Hot Maroc, will be published by Syracuse University Press in May.  Check out the Q&A below!

Book Culture: How did you come to be a part of the project of getting Hot Maroc in front of English-speaking audiences?

Alex Elinson: I’m always on the hunt for new and interesting writing in Arabic. When I first heard of Hot Maroc when it was longlisted for the International Prize for Arabic Fiction in 2017, I was intrigued. A good friend of mine in Morocco put me in touch with the author, Yassin Adnan, and we immediately hit it off. I have become very interested in political and ideological debates as they play out in discussions of language and the diversity of language registers in use in Morocco. Specifically, I am interested in the increasing acceptance and use of spoken Arabic in writing, and how writing is changing in Morocco and around the Arab world. There are political and social implications for this. The internet and youth culture have played a huge role in this change, and Hot Maroc is very much about Morocco, its linguistic diversity, the messy political scene there, and how young people are defining a new Moroccan identity. The book is very much within the context of Morocco and Moroccan culture, but its focus on internet trolls, fake news, sensationalist media, and cynical politicians will be familiar to the American reader, I’m sure!

BC: Can you tell us a little bit about your translation process or what working on this particular book was like?

AE: The first step is reading the novel and deciding whether or not I want to spend years reading it over and over again. Translating a novel is a big commitment and if you don’t like or appreciate what you are translating, moving forward will be very difficult. As for this novel, working on it was a delight! My process is generally the same regardless of what I’m working on: read, produce a rough translation, then go over it however many times as necessary to make it read smoothly and clearly in English, while retaining elements of what makes it special in Arabic. Simple, right? This novel was particularly challenging, and fun, because of the many different registers (spoken and written) Yassin used while writing it. In order to depict the cacophony of modern life in Marrakech, he draws from the deep well of Arabic literature, Moroccan history, folklore, local culture, and more. As is the case anywhere, Moroccans are constantly interacting with their past, with their religious universe, with their literary heritage, and with contemporaries in other parts of the country and around the world. Recognizing and re-producing this diversity of cultural cues and language in English was challenging. I read out loud a lot, because in this novel in particular, the sound of what people are saying and what their writing sounds like is essential for capturing the essence of their characters and context. It is very much a novel of and about the city of Marrakech, and I wanted to reproduce the sound of the city that exists in the original Arabic. I was very happy to be able to work closely with Yassin, as well as his brother, Fadlellah, both of whom were extremely generous with their time and attention to detail, particularly in helping to find the right tone for certain references. Insults, trash talk, and humor can be especially challenging to hit the proper tone in English, but I think, in the end, it works. Whenever I translate, I rely on the help of as many people as I can get to read certain translated words, passages, expressions, and so on. The more readers and readings the better, and that includes people who know Arabic and those who don’t. And I edit a lot. I must have read through this novel ten times or more. And I still enjoy it!

AE: I’m about halfway through N.K. Jemisin’s Broken Earth Trilogy, currently reading The Obelisk Gate. I’m a relative newcomer to Jemisin’s work, but I am completely hooked! Her ability to create creatures, worlds, and histories that both resemble ours and are entirely imaginative and speculative is truly amazing. Her characters have powers that can and do alter the physical world around them that is fantastic and familiar. The world she writes of is violent, beautiful, confusing, cruel, and populated with beings of all sorts. It is dystopian-fantasy and hyper-real all at the same time. I am dazzled on every page.

AE: One favorite? That’s tough. I’ll give you my four favorite books. Paul Beatty’s The Sellout is definitely one of my favorites. His ability to evoke uncontrollable laughter while simultaneously shining a bright light on this country’s racist past and present is, for me, the epitome of what comedy and humor are supposed to do; that is, say the things most people would not have the courage to say, and force us to sit with them, uncomfortable as that may be. I remember reading that book on the subway and having to put it back in my bag because of how hard I was laughing, and how uncomfortable I was laughing at a particular scene. In a similar vein, I just read Charles Yu’s Interior Chinatown in one sitting! I can’t remember the last time I did that. Bernardine Evaristo’s Girl, Woman, Other is amazing in its sensitive account of twelve women’s intertwined lives as they navigate their own challenges that are generational, racial, gendered, sexual, and more. Her particular skill in characterization and writing so succinctly in so many different voices is so powerful, and necessary. Everyone has a story to tell, and these books all give voice to those stories in ways that are humorous, powerful, and sincere.

As for non-fiction, there are many, but Robert Caro’s The Power Broker definitely stands above the rest for me. Not only is it a wonder of research and storytelling about the master builder (and wrecker) of twentieth century New York, Robert Moses, but it is a soothing antidote to the quick toss-off “discourse” that thrives on social media. It is long and it is detailed, inviting you in to stay awhile. The book completely changed the way I think about power and politics, and how I look at the landscape of New York City and its suburbs to this day.

BC: Is there anything you are particularly looking forward to the publication of?

AE: I wish I had an inside view of what was in the pipeline for publication. Of course, I look forward to reading anything published by the aforementioned authors. Other authors whose new work I will always read are Margaret Atwood, Youssef Fadel, Mohsin Hamid, Laila Lalami, David Mitchell, and Richard Powers. I can say for sure that Yassin Adnan is working on a follow up to Hot Maroc, and I am certainly looking forward to reading that.

BC: What’s next? Any upcoming projects in the works that you can tell us about?

AE: I am currently translating Khadija Marouazi’s Biography of Ash which is a fictional prison narrative that takes the reader into the Years of Lead in Morocco (1960s-1980s) when thousands of political dissidents were arrested, imprisoned, tortured, and disappeared. Following the death of King Hassan II in 1999, there was a veritable explosion of voices talking about the Years of Lead. In the early-2000s, as a result of human rights reforms that had begun in the early 1990s, Moroccans were expressing themselves as never before in the form of published written material (prison memoirs, poetry collections, and novels), cinema, and public forums that included television airings of testimonials. This novel is a part of that wave.

Alexander Elinson is head of the Arabic program at Hunter College of the City University of New York. He is the author of Looking Back at al-Andalus: The Poetics of Loss and Nostalgia in Medieval Arabic and Hebrew Literature, published by Brill (2009), as well as articles, reviews and translations on the Arabic and Hebrew strophic poem (zajal and muwashshah), rhymed prose maqama, and modern Arabic poetry and narrative in peer-reviewed journals. He has also published numerous translations of Moroccan poetry and fiction into English that include works by Allal Bourqia, Adil Latefi, Ahmed Lemsyeh, Khadija Marouazi, Driss Mesnaoui, and two novels by Youssef Fadel: A Beautiful White Cat Walks with Me (2016) and A Shimmering Red Fish Swims with Me (2019) which was shortlisted for the 2020 Saif Banipal Translation Prize for Arabic Literary Translation.

The Sellout: A Novel (Paperback)

The Power Broker: Robert Moses and the Fall of New York (Paperback)

Looking Back at Al-Andalus: The Poetics of Loss and Nostalgia in Medieval Arabic and Hebrew Literature (Paperback)

A Beautiful White Cat Walks with Me (Hoopoe Fiction) (Paperback)

A Shimmering Red Fish Swims with Me (Hoopoe Fiction) (Paperback)