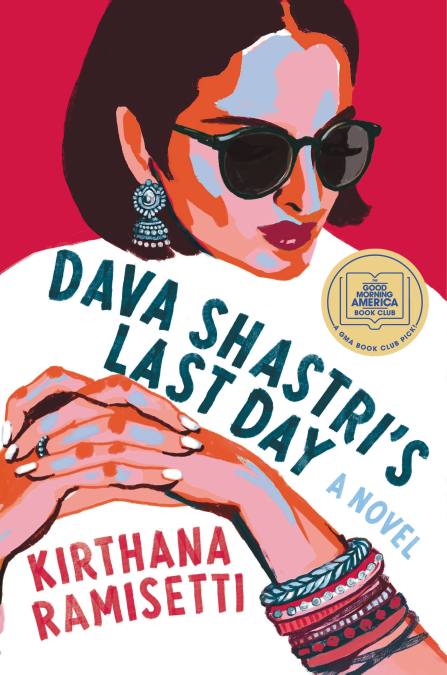 This week we had the great opportunity to chat with author Kirthana Ramisetti about her recent release, Dava Shastri's Last Day, out from Grand Central Publishing. Check out the Q&A below!

1) How did you come to write Dava Shastri's Last Day?

Dava was my third attempt at writing a novel in about twenty years. So for this time around, I decided to really go for it, and pour in all the ideas and themes I had long found fascinating. Some of these things included celebrity gossip, media and legacy.

I was specifically inspired by time as an entertainment reporter, one of the stories we often had to cover was the deaths of celebrities. As a part of that coverage, we had to be attuned to the public response on social media. And each time I saw the collective outpouring of grief in response to the news, I was curious if other notable figures would see the reaction and wonder what would be said about them when they passed away.

That led me to come up with my novel's premise: What if there was a famous person so obsessed with their legacy that they leaked news of their death in order to read their obituaries? And I really wanted to know who this person would be, how she would be able to accomplish it, and what would drive her to do something so extreme.

Three wonderful novels and a beautiful short story collection: Turmeric & Sugar by Anna Vangala Jones; The Baddest Girl on the Planet by Heather Frese; Tell Me How to Be by Neel Patel; and an galley of Circa, the highly anticipated novel by The Atlas of Reds and Blues author Devi S. Laskar.

If I have to narrow it down to one book, I'll say it's the first book that enraptured and delighted me: The Westing Game by Ellen Raskin. As a child, I had always been a reader of books by Beverly Cleary and Judy Blume, plus the The Babysitters Club and Nancy Drew. But The Westing Game was a transformative experience, so fun, witty and imaginative, and unlike anything I've read before. It deepened my love of books and reading.

Another all-time favorite is A Visit from the Goon Squad by Jennifer Egan, so I can't wait to read Goon Squad's sibling novel The Candy House. I just read an excerpt and it heightened my anticipation even more.

I’m currently working on a second novel for Grand Central Publishing that is also steeped in pop culture. I like to think of it as sort of a pop culture detective story--if you’ve ever gone down an internet rabbit hole, then you’ll find this book very relatable. It’s been a lot of fun to write.

As a former entertainment reporter for Newsday and the New York Daily News, Kirthana Ramisetti has written her fair share of stories about the lives (and deaths) of the rich and famous. She has a master’s degree in creative writing from Emerson College, and her work has been published in the New York Times, The Wall Street Journal, Entertainment Weekly, The Atlantic, and elsewhere. Dava Shastri’s Last Day is her first novel, and she lives in New York City.

The Baddest Girl on the Planet (Paperback)

Tell Me How to Be: A Novel (Hardcover)

The Atlas of Reds and Blues: A Novel (Paperback)

A Visit from the Goon Squad (Paperback)