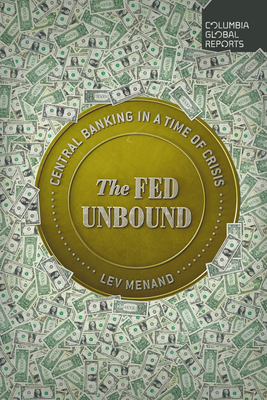 This week we had the great opportunity to chat with writer Lev Menand whose newest book, The Fed Unbound will be published by Columbia Global Reports in May.  Check out the Q&A on our blog!

Book Culture: How did you come to write The Fed Unbound?

Lev Menand: When the pandemic began to spread in March 2020, the U.S. experienced a severe financial crisis that went largely unnoticed. The reason was the crisis was quickly quelled by an enormous response from the Federal Reserve. It struck me that something really important had happened that most people missed: the government put trillions of dollars to work to aid the financial sector and boost the fortunes of asset owners just to keep the economy from collapsing for reasons that had little to do with the measures taken to protect public health. I wanted to understand why that had happened and what we could do to manage the economy in a more equitable way in the future.

LM: I am reading Ways and Means by Roger Lowenstein and How China Escaped Shock Therapy by Isabella Weber.

LM: I do not have a favorite book, but I do recommend Bray Hammond’s Banks and Politics in America.

BC: Is there anything you are particularly looking forward to the publication of?

LM: Stefan Eich’s The Currency of Politics due out May 24.

BC: What’s next? Any upcoming book projects in the works that you can tell us about?

LM: I am working on a project about the different ways that societies create money comparing the three approaches taken by U.S. policymakers historically with several contemporary proposals from cryptocurrency to digital dollars to public banking.

Lev Menand’s research focuses on money and banking, central banking, financial regulation, administrative law, separation of powers, corporate governance, and the history of economic thought. In 2020, he co-authored a proposal, FedAccounts: Digital Dollars, for the Federal Reserve to offer to the general public the option to hold digital currency accounts at the central bank. The FedAccounts proposal has been endorsed by The New York Times Editorial Board, and legislation to implement it has been introduced in Congress.

Menand served as senior adviser to the deputy secretary of the Treasury from 2015 to 2016 and as senior adviser to the assistant secretary for Financial Institutions from 2014 to 2015. While at the Treasury, he worked on financial regulatory reform, financial sector cybersecurity, Treasury market infrastructure, financial inclusion, and U.S. investment security. Menand was previously an economist at the Federal Reserve Bank of New York in the Supervision Group, where he was part of the Governance and Culture Reform initiative, and in its Research and Statistics Group, where he helped to develop econometric models for the Federal Reserve System’s first Comprehensive Capital Assessment and Review. While at the New York Fed, he was seconded to the Financial Stability Oversight Council, where he helped to prepare the council’s first financial stability report.

He clerked for Judge Jed S. Rakoff on the U.S. District Court for the Southern District of New York and Chief Judge Robert A. Katzmann on the U.S. Court of Appeals for the 2nd Circuit. On January 1, 2022, Menand joined the faculty of Columbia Law School, where he was previously an academic fellow and lecturer in law.

The Fed Unbound: Central Banking in a Time of Crisis (Paperback)

Ways and Means: Lincoln and His Cabinet and the Financing of the Civil War (Hardcover)

The Currency of Politics: The Political Theory of Money from Aristotle to Keynes (Hardcover)