Translator Q & A with Chip Rossetti 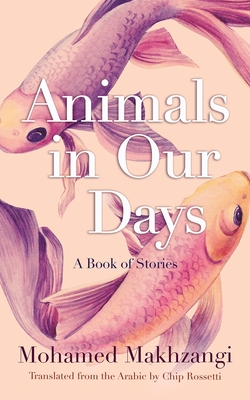 This week we had the great opportunity to talk to Chip Rossetti whose recent translation of Mohamed Makhzangi's Animals in Our Days is released this month by Syracuse University Press.  Check out the Q & A below!

Book Culture: How did you come to be a part of the project of getting Animals in Our Days in front of English-speaking audiences?

Chip Rossetti: I came across this book when it was first published in 2006. At the time, I was living in Cairo, working as an editor at the American University in Cairo Press and a devoted reader of Egypt’s main literary weekly newspaper, Akhbar al-Adab, which is where I first read about this book. I was already familiar with Mohamed Makhzangi’s memoir about his experiences as a young doctor living in Kyiv in 1986 at the time of the Chernobyl disaster (published by AUC Press in English as Memories of a Meltdown) and was curious enough about this new book that I headed over to one of Cairo’s downtown bookstores to hunt down a copy for myself.

When I left Cairo and started graduate school, I decided to translate Animals in Our Days as part of my master’s thesis. I ended up submitting it to PEN America for a PEN/Heim translation grant, and was fortunate enough to win one. But for various reasons, though, I had to set the book aside as I turned to other projects. It was only in early 2020, soon after the lockdown began, that I decided to dust off the translation, revise it, and make another go at finding a publisher. Makhzangi was very pleased to hear from me again after all those years, so I’m quite happy that it’s finally seeing the light of day!

BC: Can you tell us a little bit about your translation process or what working on this particular book was like?

CR: All translation is really re-translation, and that was certainly the case with this book, where I came back to it after a number of years. Clunky phrases, including awkward translations that hewed too closely to the original, jumped out at me. In the particular case of Animals in Our Days, Makhzangi’s stories sometimes read like travelogues—many of them are narrated in the first person and are based on the author’s own global travels—while others are narrated from the point of view of an animal. One story, “Water Buffalo,” is written in the form of a police report relaying the events that led up to a disastrous night in a rural farm village. In that case, the challenge was how to convey the neutral, formal style of the Arabic while getting across the close detail that is a hallmark of Makhzangi’s fiction.

CR: I recently read Hisham Matar’s Anatomy of a Disappearance, which tells a fictional version of the real-life disappearance of his father that he recounts in his later memoir The Return. I may be showing my age, but I just finished reading Chuck Klosterman’s highly entertaining, The Nineties: A Book. Very informative, even for someone who lived through that decade! Lastly, I’m just about to board a plane and am bringing with me Cherif Majdalani’s Moving the Palace, a French-language novel by a Lebanese author, ably translated Edward Gauvin. It’s set just before World War I, on two Lebanese who cross paths in the Sahara during the height of European imperialism in Africa, and involves a mad plan to transport a disassembled palace by camel across North Africa.

CR: Picking an all-time personal favorite is a bit of a fool’s errand, but if I have to pick one, I would choose the haunting novel Basrayatha by the Iraqi author Muhammad Khudayyir, the subject of my dissertation. It was beautifully translated into English by William Hutchins, and was the novel that set me on the path to graduate school. It’s an homage to the author’s home city of Basra, rendered here a fictional version of itself. With echoes of Borges and Calvino, Basrayatha tells the story of a city as a series of fragments and memories. But it’s also a meditation on survival and continuity in the face of war and destruction, and a study on how places contain layers of hidden pasts beneath their surfaces, both the ache of loss and the miracle of renewal.

BC: What’s next? Any upcoming projects in the works that you can tell us about?

CR: I’m excited that Animals in Our Days is finally in print, but I have another translation coming out in August: No Windmillls in Basra, a collection of flash fiction by the Iraqi author Diaa Jubaili. Like all good flash fiction, Jubaili’s stories can be odd, haunting, funny, and surprising—often all four in the space of the same short few paragraphs. I’m also working on a translation of a text on the marvels of the world by a 12th-century Andalusian writer, who ended up traveling from the Iberian Peninsula to Egypt, the Middle East, and what is now Hungary and central Russia. It’s a fascinating text, with chapters on sea creatures and famous tombs, and I’m thrilled to be working on it.

Chip Rossetti is the editorial director of the Library of Arabic Literature at New York University Press. His translations include Ahmed Khaled Towfik’s Utopia and Sonallah Ibrahim’s Beirut, Beirut.

Animals in Our Days: A Book of Stories (Middle East Literature in Translation) (Paperback)

No Windmills in Basra (Paperback)

Basrayatha: The Story of a City (Paperback)

Anatomy of a Disappearance: A Novel (Paperback)

The Return (Pulitzer Prize Winner): Fathers, Sons and the Land in Between (Paperback)

The Nineties: A Book (Hardcover)