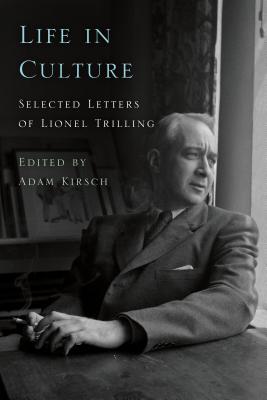 Join us at Book Culture on 112th as Adam Kirsch discusses Life in Culture: Selected Letters of Lionel Trilling on Tuesday, September 25th at 7pm.

A great critic’s quarrels with himself and others, as revealed in his correspondence

In the mid-twentieth century, Lionel Trilling was America’s most respected literary critic. His powerful and subtle essays inspired readers to think about how literature shapes our politics, our culture, and our selves. His 1950 collection, The Liberal Imagination, sold more than 100,000 copies, epitomizing a time that has been called the age of criticism.

To his New York intellectual peers, Trilling could seem reserved and circumspect. But in his selected letters, Trilling is revealed in all his variousness and complexity. We witness his ardent courtship of Diana Trilling, who would become an eminent intellectual in her own right; his alternately affectionate and contentious rapport with former students such as Allen Ginsberg and Norman Podhoretz; the complicated politics of Partisan Review and other fabled magazines of the period; and Trilling’s relationships with other leading writers of the period, including Saul Bellow, Edmund Wilson, and Norman Mailer.

In Life in Culture, edited by Adam Kirsch, Trilling’s letters add up to an intimate portrait of a great critic, and of America’s intellectual journey from the political passions of the 1930s to the cultural conflicts of the 1960s and beyond.

Adam Kirsch is a poet and literary critic whose writing appears in The New Yorker, The New York Review of Books, and other publications. He lives in New York.

Lionel Trilling (1905-74) taught at Columbia University from 1931 until his death and was the author of many books, including Matthew Arnold and a novel, The Middle of the Journey.