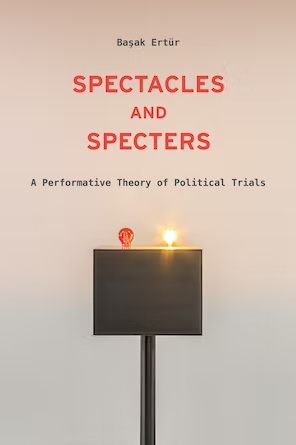 Join us at Book Culture 112th on Thursday, October 13th at 7pm for a reading and panel discussion of Spectacles and Specters: A Performative Theory of Political Trials with the author, Basak Ertür. She will be in conversation with Anthony Alessandrini, Judith Butler, and Samera Esmeir.

About Spectacles and Specters:

Spectacles and Specters draws on theories of performativity to conceptualize the entanglements of law and political violence, offering a radical departure from accounts that consider political trials as instrumental in exercising or containing political violence. Legal scholar Başak Ertür argues instead that making sense of the often incalculable interpenetrations of law, politics, and violence in trials requires shifting the focus away from law’s instrumentality to its performativity.

Ertür develops a theory of political trials by reconstructing and building on a legacy of critical thought on Nuremberg in close engagement with theories of performativity. She then offers original case studies that introduce a new perspective by looking beyond the Holocaust trials, to the Armenian genocide and its fragmentary legal aftermaths. These cases include the 1921 trial of Soghomon Tehlirian, the 2007-21 Hrant Dink Murder Trial, and the 2015 case before the European Court of Human Rights concerning the denial of the Armenian genocide.

Enabling us to capture the various modalities in which the political emerges in, through and in relation to legal forms on the stage of the trial, this focus on law’s performativity also allows us to account for how sovereign schemes can misfire and how trials can come to have unintended political lives and afterlives. Further, it reveals how law is entangled with and perpetuates certain histories of violence, rather than simply ever mastering these histories or providing closure.

Anthony Alessandrini is Professor of English and Middle Eastern Studies at the City University of New York. He is the author of Frantz Fanon and the Future of Cultural Politics and of the forthcoming book Decolonize Multiculturalism.

Samera Esmeir is Associate Professor in the Department of Rhetoric at the University of California, Berkeley, and is the senior editor of Critical Times: Interventions in Global Critical Theory. She is the author of Juridical Humanity: A Colonial History (Stanford University Press, 2012) and is currently completing a second book titled, The Struggle that Remains: Between World and International.

Spectacles and Specters: A Performative Theory of Political Trials (Paperback)