Join us on Monday, June 8th, at 7pm for a discussion on Ben Stewart's Don't Trust, Don't Fear, Don't Beg: The Extraordinary Story of the Arctic 30. Stewart will be joined in conversation by Peter Willcox, who captained the Arctic Sunrise when it was seized. The event will be moderated by Robert Eshelman, Environment Editor of VICE News.

Don’t Trust, Don’t Fear, Don’t Beg chronicles the headline-making symbolic protest on a Russian oil rig in the Arctic Circle and the ensuing fight to get thirty Greenpeace activists out of Russia’s vicious prison system. Thrown together by a common cause, the activists were determined to stop Putin and the oligarchs. But their protest was met with brutal force when Putin’s commandos seized the Arctic Sunrise. Held under armed guard by masked men, they were charged with piracy and faced fifteen years in Russia’s nightmarish prison system.

Ben Stewart—a key member of the campaign to release the Arctic 30—tells an astonishing tale of passion, courage, brutality, and survival. With wit, verve, and candor, he chronicles the extraordinary friendships the activists made with their often murderous cellmates, their battle to outwit the prison guards, and the struggle to stay true to the cause that brought them there

The book has been called by Bill McKibben, “a riveting adventure story, with real-life heroes and planet-sized stakes” and by Gary Shteyngart as “a fascinating tale of bravery in the face of totalitarian cruelty. A true page-turner and an important book for our times.”

As head of Greenpeace’s media department, author Ben Stewart spearheaded the global media campaign to free the Arctic 30. He was the exhibition leader on Greenpeace’s first mission to confront Arctic oil drillers off the coast of Greenland in 2010.

Peter Willcox started sailing for the environment in 1973 on the Clearwater, the boat started by folksinger Pete Seeger. He has skippered Greenpeace ships since 1981 and was the captain on the first Rainbow Warrior that was bombed in New Zealand by the French secret service in 1985. He was the captain of the Arctic Sunrise ship when it was seized and the only American member in the crew of 30 international activists.

Robert S. Eshelman is Environment Editor at VICE News. His articles have appeared in The American Prospect, The Baffler, ClimateWire, InsideClimate News, Columbia Journalism Review, Scientific American, The Nation, and Mother Jones, among other publications. He was a contributing writer at The Brooklyn Rail and worked on the Emmy-winning series Years of Living Dangerously.

Greenpeace was formed in 1971 by a group of thoughtful, committed citizens. It is now the leading independent campaigning organization using peaceful protest and creative communication to expose global environmental problems and to promote solutions that are essential to a green and peaceful future. For more information, visit: www.greenpeace.org/usa/en/

Author royalties from sales of the book will go to groups that fight for environmental protection and the rights of political prisoners. 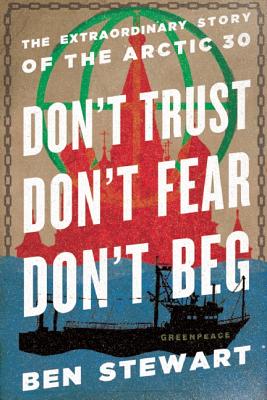