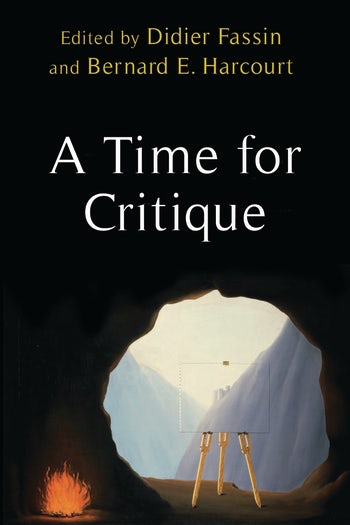 Join us at Book Culture on Friday, November 8th at 7pm for a discussion around A Time for Critique with the editors, Bernard Harcourt and Didier Fassin, along with  Miriam Ticktin.

In a world of political upheaval, rising inequality, catastrophic climate change, and widespread doubt of even the most authoritative sources of information, is there a place for critique? This book calls for a systematic reappraisal of critical thinking—its assumptions, its practices, its genealogy, its predicament—following the principle that critique can only start with self-critique.

In A Time for Critique, Didier Fassin, Bernard E. Harcourt, and a group of eminent political theorists, anthropologists, sociologists, philosophers, and literary and legal scholars reflect on the multiplying contexts and forms of critical discourse and on the social actors and social movements engaged in them. How can one maintain sufficient distance from the eventful present without doing it an injustice? How can one address contemporary issues without repudiating the intellectual legacies of the past? How can one avoid the disconnection between theory and action? How can critique be both public and collective? These provocative questions are addressed by revisiting the works of Foucault and Arendt, Said and Césaire, Benjamin and Du Bois, but they are also given substance through on-the-ground case studies that treat subaltern criticism in Palestine, emancipatory mobilizations in Syria, the antitorture campaigns of Sri Lankan activists, and the abolitionism of the African American critical resistance and undercommons movements in the United States. Examining lucidly the present challenges of critique, A Time for Critique shows how its theoretical reassessment and its emerging forms can illuminate the imaginative modalities to rejuvenate critical praxis.

Didier Fassin is the James Wolfensohn Professor at the Institute for Advanced Study and a director of studies at the École des Hautes Études en Sciences Sociales. The author of several books, including most recently Life: A Critical User's Manual, he was the first social scientist to receive the Nomis Distinguished Scholar Award.

Bernard E. Harcourt is the Isidor and Seville Sulzbacher Professor of Law and professor of political science at Columbia University and a director of studies at the École des Hautes Études en Sciences Sociales. Founding director of the Columbia Center for Contemporary Critical Thought at Columbia University, he is the author of several books, including most recently The Counterrevolution: How Our Government Went to War Against Its Own Citizens.

Miriam Ticktin is Associate Professor of Anthropology at The New School for Social Research. She was Chair of Anthropology from 2016-2018, Co-Director of the Zolberg Institute on Migration and Mobility between 2013-2016 and Director of Gender Studies from 2012-2013. She received her PhD in Anthropology at Stanford University and the Ecole des Hautes Etudes en Sciences Sociales in Paris, France, and an MA in English Literature from Oxford as a Rhodes Scholar. Before coming to the New School, Miriam was an Assistant Professor in Women’s Studies and Anthropology at the University of Michigan, and also held a postdoctoral position in the Society of Fellows at Columbia University.

A Time for Critique (New Directions in Critical Theory #58) (Paperback)