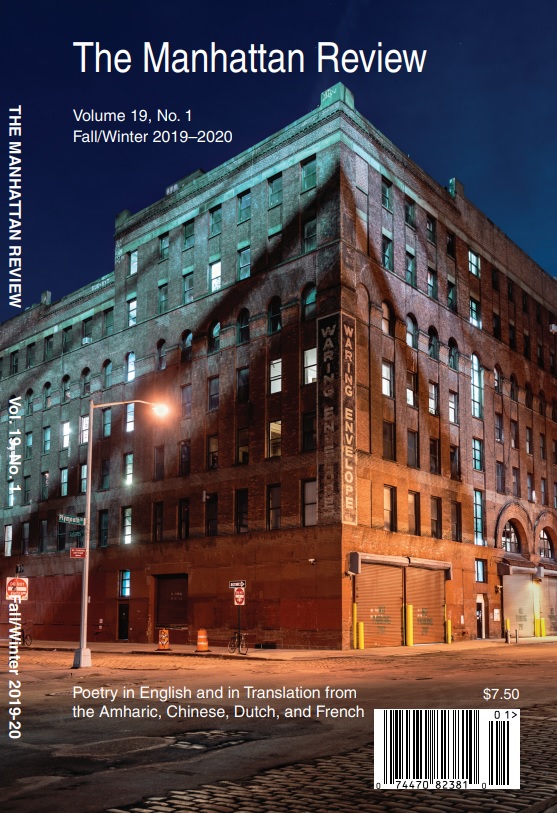 The Manhattan Review, a local magazine (Columbia neighborhood) with an international reach, was founded by Philip Fried in 1980. Since that time it has combined the work of American poets with that of poets from around the world. In 1984, for example, MR devoted an entire issue to the work of Polish poet Zbigniew Herbert, and in the early 1990s MR was one of the first American journals to publish the poetry of Bei Dao. For a number of years, we have regularly published British poets alongside American poets. For more about MR and an archive of past issues, go to our Web site: www.themanhattanreview.com

Frank Beck has contributed to The Manhattan Review for more than 30 years, as poet, critic, and translator. He is currently working on an annotated edition of Das Haus, by German novelist Lou Andreas-Salomé.

Kate Farrell is the author of 7 books. Two were coauthored by the poet Kenneth Koch, including Sleeping on the Wing: An Anthology of Modern Poetry with Essays on Reading and Writing, a volume widely used in high school and college classrooms. Farrell taught writing at Columbia University and the NY State Poets in the Schools Program, and she acted for many years with the New York Art Theater Institute. Her most recent book, Visiting Night at the Academy of Longing, (Lavender Ink, 2016) is a volume of poems.

Philip Fried, the founder of The Manhattan Review, has published eight books of poetry, including Squaring the Circle (Salmon Poetry, Ireland, 2017), Interrogating Water (Salmon, 2014), and the forthcoming Among the Gliesians (Salmon, 2020). Recently, his poem "Yoga for Leaders and Others" was selected by Carol Rumens for her anthology Smart Devices: 52 Poems from The Guardian's 'Poem of the Week' (Carcanet).
www.philiphfried.com

D Nurkse is the author of eleven poetry collections, most recently Love in the Last Days, Knopf 2017. He's a recipient of the Literature Award from the American Academy of Arts and Letters.

Barry Wallenstein is the author of eight collections of poetry, the most recent being  Time on the Move, Xanadu Press / Washington St Press, 2020;  At the Surprise Hotel and Other Poems [Ridgeway Press, 2016] and Drastic Dislocations: New and Selected Poems [New York Quarterly Books, 2012]. His poetry has appeared in over 100 journals, and  among his awards is the Poetry Society of America’s Lyric Poetry Prize. He has made eight recordings of his poetry with jazz, the most recent being Lisbon Sunset, (2016) and What Was, Was (Audioscope, 2015).
www.barrywallenstein.com