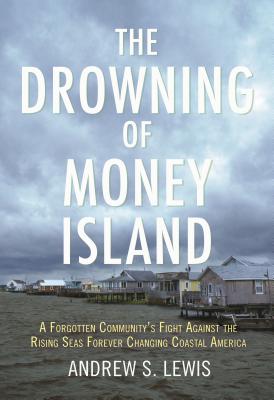 Join us on Tuesday, October 22nd at 7pm for a discussion of The Drowning of Money Island: A Forgotten Community’s Fight Against the Rising Seas Threatening Coastal America with the author, Andrew S. Lewis. Joining him in conversation is Professor Lis Harris.

Offers a glimpse of the future of vanishing shorelines in America in the age of climate change, where the wealthy will be able to remain the longest while the poor will be forced to leave.

Journalist Andrew Lewis chronicles the struggle of his New Jersey hometown to rebuild their ravaged homes in the face of the same environmental stresses and governmental neglect that are endangering coastal areas throughout the United States. Lewis grew up on the Bayshore, a 40-mile stretch of Delaware Bay beaches, marshland, and fishing hamlets at the southern end of New Jersey, whose working-class community is fighting to retain their place in a country that has left them behind. The Bayshore, like so many rural places in the US, is under immense pressure from a combination of severe economic decline, industry loss, and regulation. But it is also contending with one of the fastest rates of sea level rise on the planet and the aftereffects of one of the most destructive hurricanes in American history, Superstorm Sandy. If in the years prior to Sandy the Bayshore had already been slowly disappearing, its beaches eroding and lowland cedar woods hollowing out into saltwater-bleached ghost forests, after the hurricane, the community was decimated. Today, homes and roads and memories are crumbling into the rising bay.

Cumberland, the poor, rural county where the Bayshore is located, had been left out of the bulk of the initial federal disaster relief package post-Sandy. Instead of money to rebuild, the Bayshore got the New Jersey Department of Environmental Protection's Superstorm Sandy Blue Acres Program, which identified and purchased flood-prone neighborhoods where working-class citizens lived, then demolished them to be converted to open space.

The Drowning of Money Island is an intimate yet unbiased, lyrical yet investigative portrait of a rural community ravaged by sea level rise and economic hardship, as well as the increasingly divisive politics those factors have helped spawn. It invites us to confront how climate change is already intensifying preexisting inequality.

Andrew S. Lewis is a contributing writer for Outside and has also written for the New York Times Magazine and Guernica. He received an MFA in nonfiction writing from Columbia University. In 2018 he was awarded a CATWALK Art Residency. He lives in South Jersey, between the ocean and the bay. Connect with him at andrewslewis.com and on Twitter at @andrewslewis1.

Lis Harris was a staff writer at The New Yorker from 1970 to 1995. She is a professor in the School of the Arts at Columbia University. In addition to innumerable articles, reviews and commentaries, she is the author of Holy Days: The World of a Hasidic Family, a New York Times Notable Book of the Year, Rules of Engagement: Four American Marriages, and Tilting at Mills: Green Dreams, Dirty Dealings and the Corporate Squeeze.

In Jerusalem: Three Generations of an Israeli Family and a Palestinian Family (Hardcover)