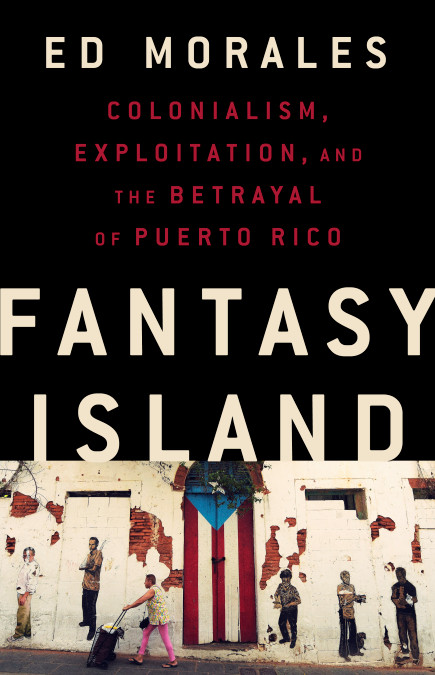 Please join us Thursday, October 17th at 7pm to celebrate the release of Fantasy Island: Colonialism, Exploitation, and the Betrayal of Puerto Rico. The author, Ed Morales, will be in conversation with Carina del Valle Schorske.

The tragedy of US involvement in Puerto Rico, tracing the decades of economic and political exploitation that led to the debt crisis, hobbled the hurricane recovery efforts, and forced the island into a state of despair.

For the last century, Puerto Rico has served as a testing ground for the most aggressive and exploitative U.S. economic, political, and social policies. The devastation was laid bare by Hurricane María in 2017, which exposed how the island as a whole was deteriorating, and the merciless path of destruction created by the island’s debt crisis could no longer be covered up.

In Fantasy Island, journalist Ed Morales uncovers the roots of the crisis. The island has been a colonial satellite, a dumping ground for U.S. manufactured goods, a tax shelter, and now a blank canvas for disaster capitalism on the frontlines of climate change. The suffering and struggle of Puerto Ricans is colossal evidence of the colonial wound the U.S. has inflicted on much of Latin America, and a nagging harbinger of the potential fate of the rest of the United States.

Morales takes readers from San Juan to New York City and back, showing us both the machinations of financial leaders and politicians in the U.S. and the resistance efforts of activists in Puerto Rico. The fate of Puerto Rico depends on how it survives the critical years ahead, and Fantasy Island is a necessary account of the forces that brought the island to its knees.

Carina del Valle Schorske is a writer and translator living between New York City and San Juan, Puerto Rico. Her writing has appeared in the New York Times Magazine, Lit Hub, the New Yorker online, Longreads, small axe, and elsewhere. She won Gulf Coast's 2016 Prize for her translations of the poet Marigloria Palma, and collaborated with Erica Mena, Ricardo Maldonado, and Raquel Salas Rivera on the bilingual broadside project Puerto Rico en mi corazón to raise money for hurricane relief. She is the happy recipient of fellowships from CantoMundo, the MacDowell Colony, and Jack Jones. Right now she is at work on her first book, a psychogeography of Puerto Rican culture, forthcoming from Riverhead.