We are currently working with very limited staffing and your patience is greatly appreciated. Thank you!
Event date:
04/24/2018 - 7:00pm 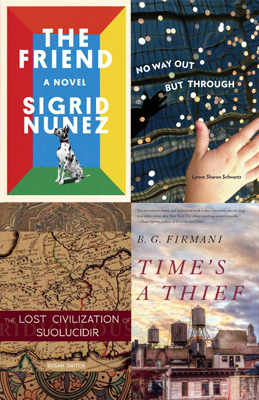 Sigrid Nunez is the author of the novels Salvation City, The Last of Her Kind, A Feather on the Breath of God, For Rouenna, and most recently, The Friend. She has been the recipient of several awards including a Whiting Writers' Award, the Rome Prize in Literature, and a Berlin Prize Fellowship. She lives in New York City.

Susan Daitch is the author of five works of fiction, and her work was the subject of an issue of "The Review of Contemporary Fiction" along with David Foster Wallace and William Vollman. She has been the recipient of two Vogelstein awards, research grants from NYU, CUNY,  was awarded a 2012 Fellowship in Fiction from the New York Foundation of the Arts. Her novel, L.C., won an NEA Heritage Award and was a Lannan Foundation Selection. She lives in Brooklyn with her son and teaches at Hunter College.

B. G. Firmani is a graduate of Barnard College and holds an MFA from Brown. Her short fiction has been published in BOMB Magazine, The Kenyon Review, and Bellevue Literary Review. She is the recipient of a New York Foundation for the Arts fellowship and has been a resident at the MacDowell Colony and Yaddo. She lives in New York City.

No Way Out but Through (Pitt Poetry Series) (Paperback)

The Friend: A Novel (Hardcover)

The Lost Civilization of Suolucidir (Paperback)

Time's a Thief: A Novel (Paperback)