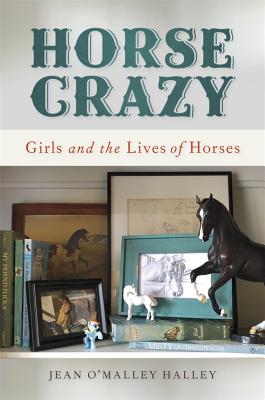 Join us on Wednesday, October 2nd at 7pm at Book Culture 112th as we welcome Jean Halley in celebration of her book Horse Crazy: Girls and the Lives of Horses.  Matthew Sharpe will be joining in conversation.

Horse Crazy explores the meaning behind the love between girls and horses. Jean O'Malley Halley, a self-professed "horse girl," contends that this relationship and its cultural signifiers influence the manner in which young girls define their identity when it comes to gender. Halley examines how popular culture, including the "pony book" genre, uses horses to encourage conformity to gender norms but also insists that the loving relationship between a girl and a horse fundamentally challenges sexist and mainstream ideas of girlhood.

Horse Crazy looks at the relationships between girls and horses through the frameworks of Michel Foucault's concepts of normalization and biopower, drawing conclusions about the way girls' agency is both normalized and resistant to normalization. Segments of Halley's own experiences with horses as a young girl, as well as experiences from the perspective of other girls, are sources for examination. "Horsey girls," as she calls them, are girls who find a way to defy the expectations given to them by society--thinness, obsession with makeup and beauty, frailty--and gain the possibility of freedom in the process.

Drawing on Nicole Shukin's uses of animal capital theories, Halley also explores the varied treatment of horses themselves as an example of the biopolitical use of nonhuman animals and the manipulation and exploitation of horse life. In so doing she engages with common ways we think and feel about animals and with the technologies of speciesism.

Jean Halley (Professor of Sociology) teaches at the College of Staten Island and the Graduate Center of the City University of New York (CUNY). She earned her doctorate in sociology at the Graduate Center of CUNY, and her master’s degree in theology at Harvard University. Her book about touching children, breastfeeding, children’s sleep, gender and heteronormativity, Boundaries of Touch: Parenting and Adult-Child Intimacy was published in 2007. She also assisted Patricia Ticineto Clough in editing The Affective Turn: Theorizing the Social (2007), and co-authored with Amy Eshleman and Ramya Vijaya, Seeing White: An Introduction to White Privilege and Race (2011). Her book, The Parallel Lives of Women and Cows: Meat Markets, a combination of memoir and social history of cattle ranching in the United States, came out in 2012. She and Amy Eshleman published Seeing Straight: An Introduction to Gender and Sexual Privilege (2017) on gender and heteronormativity. Her book, Horse Crazy: Girls and the Lives of Horses, comes out with University of Georgia Press in 2019. Halley and her horse, Snipaway, grew up in the rural Rocky Mountains.

Matthew Sharpe is the author of the novels You Were Wrong, Jamestown, The Sleeping Father, and Nothing Is Terrible. He has taught at Columbia, Wesleyan, Bard, the 92nd Street Y, and elsewhere. He has received fellowships in fiction from the National Endowment for the Arts and the New York Foundation for the arts, and has occasionally ridden a horse.

Horse Crazy: Girls and the Lives of Horses (Paperback)