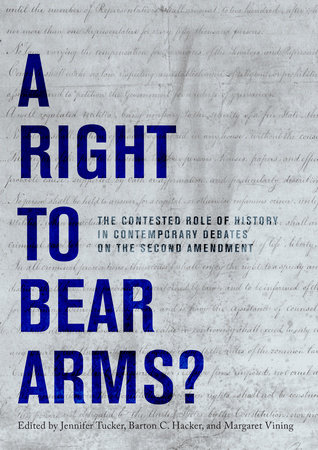 Join Book Culture on Thursday, October 24th at 7pm for a panel discussion to mark the release of A Right to Bear Arms?: The Contested Role of History in Contemporary Debates on the Second Amendment, edited by Jennifer Tucker. She will be joined by Mark Frassetto and Saul Cornell.

This collection of essays explores the way history itself has become a contested element within the national legal debate about firearms.

The debate over the Second Amendment has unveiled new and useful information about the history of guns and their possession and meaning in the United States of America. History itself has become contested ground in the debate about firearms and in the interpretation of the Second Amendment to the Constitution of the United States. Specifically this collection of essays gives special attention to the important and often overlooked dimension of the applications of history in the law. These essays illustrate the complexity of the firearms debate, the relation between law and behavior, and the role that historical knowledge plays in contemporary debates over law and policy. Wide-ranging and stimulating The Right to Bear Arms? is bound to captivate both historians and casual readers alike.

Jennifer Tucker is a historian of science, technology, evidence, and law in the History Department at Wesleyan University. The author of Nature Exposed: Photography as Eyewitness in Victorian Science (2005), she has published widely on topics ranging from visual history to technoscience to public history. She currently is finishing a Photography and Law Reader (Bloomsbury, 2020) and a book on photography and Victorian facial likeness. Her recent work explores firearms law in contemporary history and law. Co-editor of the new book, A Right to Bear Arms? The Contested Role of History in Contemporary Debates on the Second Amendment (Smithsonian Institution Scholarly Press, 2019) she also edited a round-table discussion with curators of firearms in museums across the US and UK which appeared in Technology and Culture ("Display of Arms") in July 2018.

Mark Anthony Frassetto is Senior Counsel and Deputy Director, Second Amendment History and Scholarship at Everytown for Gun Safety. He manages Everytown’s Second Amendment litigation amicus program and has drafted amicus briefs defending gun safety laws in courts across the country. Mark’s scholarship focuses on this history of firearms regulation in the United States and Great Britain. He has written several law review articles and contributed a chapter to the new book, A Right to Bear Arms? The Contested Role of History in Contemporary Debates on the Second Amendment (Smithsonian Institution Scholarly Press, 2019). Prior to joining Everytown, Mark was a fellow in the New York County District Attorney’s Office in the Cybercrime and Identity Theft Bureau where he investigated and prosecuted credit card and check fraud, stalking, computer hacking and theft. He is a graduate of Georgetown University Law Center.

Saul Cornell is the Paul and Diane Guenther Chair in American History at Fordham University, New York, and author of The Other Founders: Antifederalism and the Dissenting Tradition in America, 1788–1828 (1999) and A Well Regulated Militia: The Founding Fathers and the Origins of Gun Control in America (2006).

A Right to Bear Arms?: The Contested Role of History in Contemporary Debates on the Second Amendment (Hardcover)