We are currently working with very limited staffing and your patience is greatly appreciated. Thank you!
Event date:
11/06/2019 - 7:00pm 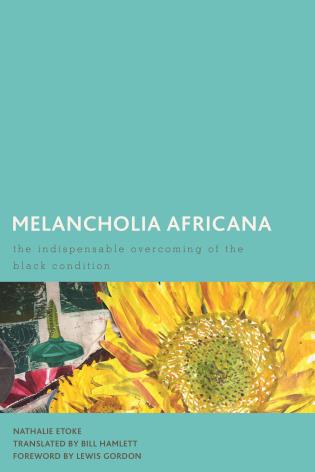 Join Book Culture on Wednesday, November 6th at 7pm for a panel conversation to celebrate the release of Melancholia Africana: The Indispensable Overcoming of the Black Condition. Author Nathalie Etoke, will be joined by Lewis R. Gordon, LaRose T. Parris, and Drucilla Cornell.

Melancholia Africana argues that in the African and Afro-diasporic context, melancholy is rooted in collective experiences such as slavery, colonization, and the post-colony. From these experiences a theme of loss resonates—loss of land, of freedom, of language, of culture, of self, and of ideals born from independence. Nathalie Etoke demonstrates that, beyond territorial expropriation and the pain inflicted upon the body and the soul, the violence that seals the encounter with the ‘other’ annihilates an age-old cycle of life. In the wake of this annihilation, continental and diasporic Africans strive to reconcile that which has been destroyed with what has been newly introduced. Their survival depends on their capacity to negotiate the inherent tension of their historical becoming. The book develops a transdisciplinary method encompassing historicism, critical theory, Africana existential thought, and poetics.

Lewis R. Gordon co-edits Rowman & Littlefield International's Global Critical Caribbean Thought series.  He is Professor of Philosophy at UCONN-Storrs; Honorary President of the Global Center for Advanced Studies; the 2018–2019 Boaventura de Sousa Santos Chair in Faculty of Economics of the University of Coimbra, Portugal; and Chair of Global Collaborations for the Caribbean Philosophical Association.  His public Facebook page is: https://www.facebook.com/LewisGordonPhilosopher/ and he is on Twitter @lewgord.

LaRose T. Parris is Associate Professor of Africana Studies at Lehman College/CUNY. Her first book, Being Apart: Theoretical and Existential Resistance in Africana Literature (University of Virginia Press, 2015), was awarded the Nicolás Guillén Prize for Outstanding Book in Philosophical Literature by the Caribbean Philosophical Association in 2016. Her fiction and criticism have appeared in Callaloo, Entre Letras, the Review of Education, Pedagogy, and Cultural Studies, and the Journal of Pan African Studies.

Drucilla Cornell is an Emeritus Professor of Political Science, Women’s Studies, and Comparative Literature at Rutgers University. She is a playwright and also launched The uBuntu Project in South Africa in 2003 and has been working with the project ever since. Professor Cornell’s theoretical and political writings span a tremendous range of both topics and disciplines. From her early work in Critical Legal Studies and Feminist Theory to her more recent work on South Africa, transitional justice, and the jurisprudence of Ronald Dworkin, Professor Cornell continues to think through new and evolving issues in philosophy and politics of global significance. Her latest title, coauthored with Stephen Seely, is called The Spirit of Revolution: Beyond the Dead Ends of Man.

Melancholia Africana: The Indispensable Overcoming of the Black Condition (Creolizing the Canon) (Paperback)