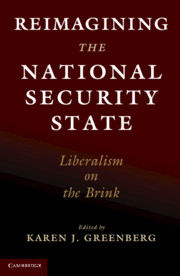 Join us Thursday, February 13th at 7pm for a panel discussion on Reimagining the National Security State: Liberalism on the Brink, edited by Karen J. Greenberg. She will be joined by Tom Durkin, Bernard E. Harcourt, Laura Pitter, and Michel Paradis.

Tom Durkin is is a nationally known trial lawyer specializing in the defense of complex federal criminal matters, with a special emphasis on the defense of prosecutions involving national security and domestic terrorism related matters. He is a Distinguished Practitioner in Residence at Loyola University Chicago School of Law, where he lectures on National Security Law and serves as Co-Founder and Co-Director of its National Security and Civil Rights Program.

Karen J. Greenberg is the director of the Center on National Security at Fordham Law. Her most recent book is Rogue Justice: The Making of the Security State (Crown, 2016). She is the Editor-in-Chief of the Soufan Group Morning Brief and the Stroz Friedberg Cyber Brief. She is currently an International Studies Fellow at New America.

Bernard E. Harcourt is the Isidor and Seville Sulzbacher Professor of Law and professor of political science at Columbia University and a director of studies at the École des Hautes Études en Sciences Sociales. Founding director of the Columbia Center for Contemporary Critical Thought at Columbia University, he is the author of several books, including most recently The Counterrevolution: How Our Government Went to War Against Its Own Citizens.

Michel Paradis is a senior attorney in the U.S. Dept. of Defense, Military Commissions Defense Organization. He is also a lecturer at Columbia Law School, a Fellow at the Center on National Security at Fordham Law and author of the forthcoming book Last Mission to Tokyo: The Extraordinary Story of the Doolittle Raiders and Their Final Fight for Justice. @MDParadis

Reimagining the National Security State: Liberalism on the Brink (Paperback)

Last Mission to Tokyo: The Extraordinary Story of the Doolittle Raiders and Their Final Fight for Justice (Hardcover)

A Time for Critique (New Directions in Critical Theory #58) (Paperback)