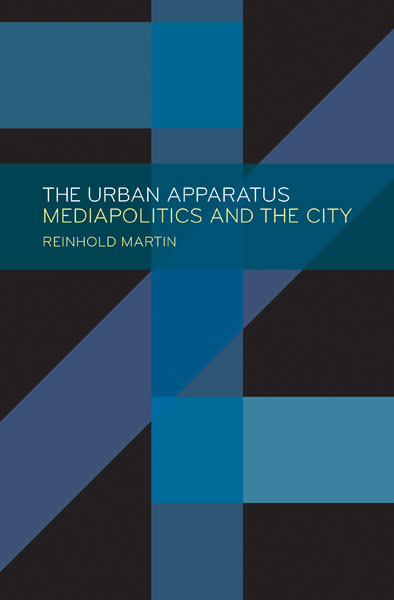 Join us Tuesday, February 21st, at 7pm for a discussion of The Urban Apparatus: Mediapolitics and the City by Reinhold Martin. Joining him in conversation is Andreas Huyssen, author of Miniature Metropolis: Literature in an Age of Photography and Film.

Urbanization is a system of power and knowledge, and today's city functions through the expansive material infrastructures of the urban order. In The Urban Apparatus, Reinhold Martin analyzes urbanization and the contemporary city in aesthetic, socioeconomic, and mediapolitical terms. He argues that understanding the city as infrastructure reveals urbanization to be a way of imparting functional, aesthetic, and cognitive order to a contradictory, doubly bound neoliberal regime.

Blending critical philosophy, political theory, and media theory, The Urban Apparatus explores how the aesthetics of cities and their political economies overlap. In a series of ten essays, with a detailed theoretical introduction, Martin explores questions related to urban life, drawn from a wide range of global topics from the fiscal crisis in Detroit to speculative development in Mumbai to the landscape of Mars, from discussions of race and the environment to housing and economic inequality. Each essay proposes a particular mediator (or a material complex) that is shaped by imaginative practices, each answering the question What is a city, today?

The Urban Apparatus serves as an urban bookend to the architectural questions explored by Martin in his earlier book Utopia's Ghost, and ultimately offers readers a way to think politically about urbanization.

Reinhold Martin is Professor of Architecture at Columbia GSAPP, where he directs the Temple Hoyne Buell Center for the Study of American Architecture. He is a member of Columbia’s Institute for Comparative Literature and Society as well as the Committee on Global Thought. Martin is a founding co-editor of the journal Grey Room and has published widely on the history and theory of modern and contemporary architecture. He is the author of The Organizational Complex: Architecture, Media, and Corporate Space (MIT Press, 2003), and Utopia’s Ghost: Architecture and Postmodernism, Again (Minnesota, 2010).

Andreas Huyssen is the Villard Professor of German and Comparative Literature at Columbia University, where he served as founding director of the Center for Comparative Literature and Society (1998-2003). He chaired the Department of Germanic Languages from 1986-1992 and again from 2005-2008. He is one of the founding editors of New German Critique (1974-), and he serves on the editorial boards of October, Constellations, Germanic Review, Transit, Key Words (UK), Critical Space (Tokyo), Memory Studies (UK), Lumina (Brazil), and Comunicação & Cultura (Portugal).

The Urban Apparatus: Mediapolitics and the City (Paperback)

Miniature Metropolis: Literature in an Age of Photography and Film (Hardcover)