The extraordinary life--the first--of the legendary, undercelebrated Hollywood director known in his day as "Wild Bill" (and he was ) Wellman, whose eighty-two movies (six of them uncredited), many of them iconic; many of them sharp, cold, brutal; others poetic, moving; all of them a lesson in close-up art, ranged from adventure and gangster pictures to comedies, aviation, romances, westerns, and searing social dramas.

Here is a revealing, boisterous portrait of the handsome, tough-talking, hard-drinking, uncompromising maverick (he called himself a "crazy bastard")--juvenile delinquent; professional ice-hockey player as a kid; World War I flying ace at twenty-one in the Lafayette Flying Corps (the Lafayette Escadrille), crashing more than six planes ("We only had four instruments, none of which worked. And no parachutes . . . Greatest goddamn acrobatics you ever saw in your life")--whose own life story was more adventurous and more unpredictable than anything in the movies. Wellman was a wing-walking stunt pilot in barnstorming air shows, recipient of the Croix de Guerre with two Gold Palm Leaves and five United States citations; a bad actor but good studio messenger at Goldwyn Pictures who worked his way up from assistant cutter; married to five women, among them Marjorie Crawford, aviatrix and polo player; silent picture star Helene Chadwick; and Dorothy Coonan, Busby Berkeley dancer, actress, and mother of his seven children.

WILLIAM WELLMAN JR. has written articles for Film Comment, Films in Review, Action Magazine, Memories Magazine, and DGA News. An actor with more than 170 screen and television credits, he has also received writing credits for nine screenplays and two television specials. He created and executive produced Wild Bill Hollywood Maverick, an award-winning documentary about his father. C'est la Guerre, a biographical film of his father's life, is currently in development. 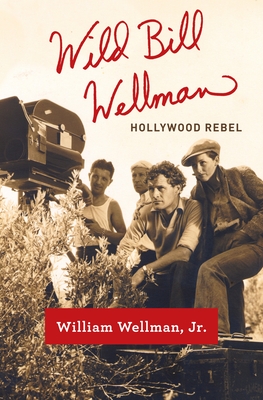