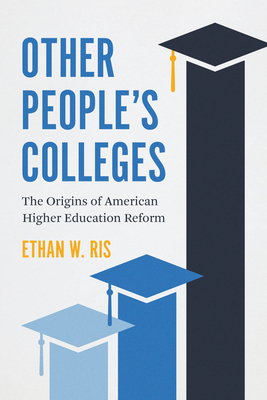 Please join our friends at Stanford Digital Education and Trinity College for a ten-part book conversation series via Zoom where leading scholars discuss how higher education can affect the public good.  The next discussion on Wednesday, July 27th at 4pm features Eddie Cole, associate professor at UCLA School of Education, interviewing Ethan Ris, assistant professor of educational leadership at University of Nevada, Reno and author of Other People’s Colleges: The Origins of American Higher Education Reform.

Other People’s Colleges: The Origins of American Higher Education Reform

An illuminating history of the reform agenda in higher education.

For well over one hundred years, people have been attempting to make American colleges and universities more efficient and more accountable. Indeed, Ethan Ris argues in Other People’s Colleges, the reform impulse is baked into American higher education, the result of generations of elite reformers who have called for sweeping changes in the sector and raised existential questions about its sustainability. When that reform is beneficial, offering major rewards for minor changes, colleges and universities know how to assimilate it. When it is hostile, attacking autonomy or values, they know how to resist it. The result is a sector that has learned to accept top-down reform as part of its existence.

In the early twentieth century, the “academic engineers,” a cadre of elite, external reformers from foundations, businesses, and government, worked to reshape and reorganize the vast base of the higher education pyramid. Their reform efforts were largely directed at the lower tiers of higher education, but those efforts fell short, despite the wealth and power of their backers, leaving a legacy of successful resistance that affects every college and university in the United States. Today, another coalition of business leaders, philanthropists, and politicians is again demanding efficiency, accountability, and utility from American higher education. But, as Ris argues, top-down design is not destiny. Drawing on extensive and original archival research, Other People’s Colleges offers an account of higher education that sheds light on today’s reform agenda.

In his book Other People’s Colleges: The Origins of American Higher Education Reform, Assistant Professor of Educational Leadership at University of Nevada, Reno Ethan Ris draw insights for today from his analysis of the early twentieth century effort by a cadre of elite, external reformers to reshape higher education — and the resistance that arose to oppose them. He will be interviewed by Eddie Cole, associate professor at UCLA School of Education and Information Studies. This event is free and part of the online book conversation series, Academic Innovation for the Public Good.

Academic Innovation for the Public Good

Stanford University and Trinity College invite you to register to attend monthly book conversations in their new series, “Academic Innovation for the Public Good.” Each event features an author of a recently published scholarly work exploring the role of higher education in addressing society’s most pressing problems. An expert in the author’s field will conduct the interview, followed by audience questions. We’re excited to launch this program, which we hope will foster discussion about how to make higher education’s future more equitable and accessible.

Each of the conversations will last for one hour starting at 4pm Eastern time on the fourth Wednesday of every month, from January 26 through October 26. Stanford and Trinity are co-sponsoring the series, in collaboration with the Stanford Humanities Center’s “Recovering the University as a Public Good” initiative, the Stanford Pathways Lab, and Stanford Digital Education.