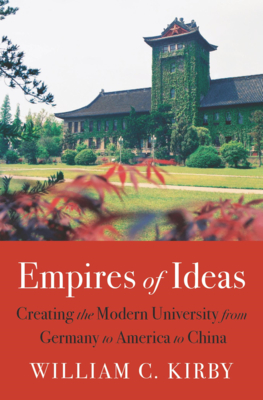 Please join our friends at Stanford Digital Education and Trinity College for a ten-part book conversation series via Zoom where leading scholars discuss how higher education can affect the public good.  The next discussion on Wednesday, June 22nd at 4pm features Noah Pickus, chief academic officer at Minerva Project, William Kirby, Spangler Family Professor of Business Administration and T. M. Chang Professor of China Studies at Harvard University and author of Empires of Ideas: Creating the Modern University from Germany to America to China.

Empires of Ideas: Creating the Modern University from Germany to America to China

The modern university was born in Germany. In the twentieth century, the United States leapfrogged Germany to become the global leader in higher education. Will China challenge its position in the twenty-first?

Today American institutions dominate nearly every major ranking of global universities. Yet in historical terms, America's preeminence is relatively new, and there is no reason to assume that US schools will continue to lead the world a century from now. Indeed, America's supremacy in higher education is under great stress, particularly at its public universities. At the same time Chinese universities are on the ascent. Thirty years ago, Chinese institutions were reopening after the catastrophe of the Cultural Revolution; today they are some of the most innovative educational centers in the world. Will China threaten American primacy?

Empires of Ideas looks to the past two hundred years for answers, chronicling two revolutions in higher education: the birth of the research university and its integration with the liberal education model. William C. Kirby examines the successes of leading universities--The University of Berlin and the Free University of Berlin in Germany; Harvard, Duke, and the University of California, Berkeley, in the United States--to determine how they rose to prominence and what threats they currently face. Kirby draws illuminating comparisons to the trajectories of three Chinese contenders: Tsinghua University, Nanjing University, and the University of Hong Kong, which aim to be world-class institutions that can compete with the best the United States and Europe have to offer.

But Chinese institutions also face obstacles. Kirby analyzes the challenges that Chinese academic leaders must confront: reinvesting in undergraduate teaching, developing new models of funding, and navigating a political system that may undermine a true commitment to free inquiry and academic excellence.

William Kirby is Spangler Family Professor of Business Administration and T. M. Chang Professor of China Studies at Harvard University. His forthcoming book, Empires of Ideas: Creating the Modern University from Germany to America to China, examines whether the most preeminent global universities could, in the coming years, be found in China rather than the United States. He will be interviewed by Noah Pickus, chief academic officer at Minerva Project. This event is free and part of the online book conversation series, Academic Innovation for the Public Good. To attend via Zoom, please click below to register.

Academic Innovation for the Public Good

Stanford University and Trinity College invite you to register to attend monthly book conversations in their new series, “Academic Innovation for the Public Good.” Each event features an author of a recently published scholarly work exploring the role of higher education in addressing society’s most pressing problems. An expert in the author’s field will conduct the interview, followed by audience questions. We’re excited to launch this program, which we hope will foster discussion about how to make higher education’s future more equitable and accessible.

Each of the conversations will last for one hour starting at 4pm Eastern time on the fourth Wednesday of every month, from January 26 through October 26. Stanford and Trinity are co-sponsoring the series, in collaboration with the Stanford Humanities Center’s “Recovering the University as a Public Good” initiative, the Stanford Pathways Lab, and Stanford Digital Education.

Empires of Ideas: Creating the Modern University from Germany to America to China (Hardcover)