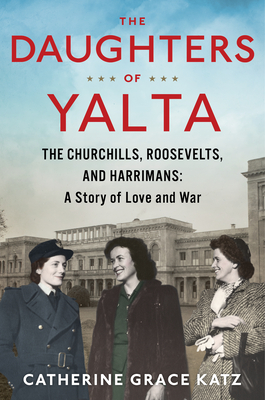 Virtual Book Talk: The Daughters of Yalta: The Churchills, Roosevelts, and Harriman: A Story of Love and War by Catherine Grace Katz

Register here for the Zoom webinar or tune in on YouTube Live.

Please join us for a webinar with Catherine Grace Katz, author of The Daughters of Yalta: The Churchills, Roosevelts, and Harrimans: A Story of Love and War (Houghton Mifflin Harcourt, September 2020).

The Daughters of Yalta is the untold story of the three intelligent and glamorous young women who accompanied their famous fathers to the Yalta Conference in February 1945, and of the conference’s fateful reverberations in the waning days of World War II.

Tensions during the Yalta Conference in February 1945 threatened to tear apart the wartime alliance among Franklin Roosevelt, Winston Churchill, and Joseph Stalin just as victory was close at hand. Catherine Grace Katz uncovers the dramatic story of the three young women who were chosen by their fathers to travel with them to Yalta, each bound by fierce family loyalty, political savvy, and intertwined romances that powerfully colored these crucial days.

Kathleen Harriman was a champion skier, war correspondent, and daughter of U.S. Ambassador to the Soviet Union Averell Harriman. Sarah Churchill, an actress-turned-RAF officer, was devoted to her brilliant father, who depended on her astute political mind. Roosevelt’s only daughter, Anna, chosen instead of her mother Eleanor to accompany the president to Yalta, arrived there as keeper of her father’s most damaging secrets. Situated in the political maelstrom that marked the transition to a post- war world, The Daughters of Yalta is a remarkable story of fathers and daughters whose relationships were tested and strengthened by the history they witnessed and the future they crafted together.

Catherine Grace Katz is a writer and historian from Chicago. She graduated from Harvard in 2013 with a BA in History and received her MPhil in Modern European History from Christ’s College, University of Cambridge in 2014, where she wrote her dissertation on the origins of modern counterintelligence practices. After graduating, Catherine worked in finance in New York City before a very fortuitous visit to the book store in the lobby of her office in Manhattan led her to return to history and writing. She is currently pursuing her JD at Harvard Law School. The Daughters of Yalta is her first book.

The Daughters of Yalta: The Churchills, Roosevelts, and Harrimans: A Story of Love and War (Hardcover)