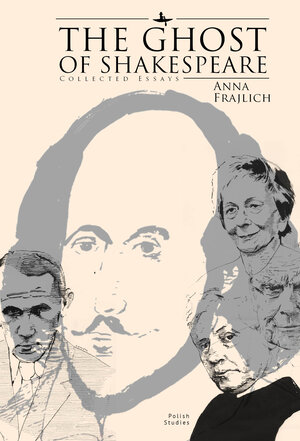 Please join our friends at The Harriman Institute at Columbia University and the Polish Institute of Arts and Sciences of America (PIASA) for an interview with Anna Frajlich, author of The Ghost of Shakespeare: Collected Essays (Academic Studies Press, 2020), conducted by Ronald Meyer (Harriman Institute), editor of the volume. Professor Robert Blobaum, President of PIASA, will chair the event.

The Ghost of Shakespeare collects the critical prose of award-winning poet Anna Frajlich, who taught Polish language and literature at Columbia University for over three decades. The volume takes its name from Frajlich's essay on Nobel Prize laureate Wisława Szymboorska, but informs her approach as a comparativist more broadly as she considers the work of major Polish writers of the 20th century. Her study of the Roman theme in Russian symbolism owes its origins to her stay in the Eternal City, the second stop on her exile from Poland in 1969. The book concludes with autobiographical essays that describe her parents' dramatic flight from Poland at the outbreak of World War II, her own exile from Poland in 1969, settling in New York City, and building her career as a scholar and leading poet of her generation. The volume closes with an Afterword by Ronald Meyer.

Anna Frajlich (Senior Lecturer Emerita) taught Polish language and literature at Columbia University for over three decades. She is author of ten books of poetry and three bilingual editions (English, French, Italian). In 2002 she received The Knight’s Cross of the Order of Merit, awarded by the President of the Polish Republic. Frajlich is also the recipient of literary awards from Kościelski Foundation, Turzański Foundation, and the Union of Polish Writers in Exile. Author photo by Dylan Zajac.

Robert Blobaum is the Eberly Family Distinguished Professor of History at West Virginian University, and President of the Polish Institute of Arts and Sciences of America.

Ronald Meyer is Publications Editor at the Harriman Institute. He teaches the seminar in Russian literary translation at Columbia University.

The event is co-sponsored by the Polish Institute of Arts and Sciences of America, which honored Professor Frajlich with its Distinguished Achievement Award for 2020.

The Harriman Institute at Columbia University is one of the world's leading academic institutions devoted to Russian, Eurasian and East European studies. Our mission is to serve our community at the university and beyond by supporting research, instruction, and dialogue, sponsoring vibrant and multidisciplinary events that bring together our extraordinary resources of faculty, students, and alumni. We are committed to training the next generation of regional specialists to play leadership roles in setting the academic and scholarly agenda, making policy and challenging accepted truths about how we study our rapidly changing world.