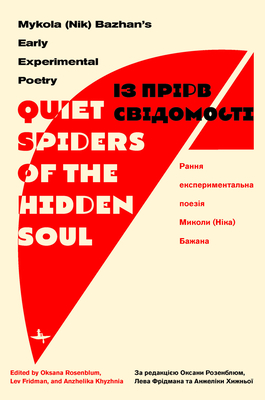 Virtual Book Event: Translating the Hidden Soul: The Discovery and Collaborative Treatment of the Early Work of Mykola Bazhan.

This event will be held virtually as a Zoom webinar and streamed via YoutTube Live.  There will be no in-person event.

The bilingual Ukrainian-English collection Quiet Spiders of the Hidden Soul: Mykola (Nik) Bazhan’s Early Experimental Poetry (Academic Studies Press, 2020) brings together the most interesting experimental works by Mykola (Nik) Bazhan, one of the major Ukrainian poets of the 20th century. An ardent Modernist, Bazhan was known for his idiosyncratic style and unique vocabulary. After Stalinist rule forced the poet into the straightjacket of officially sanctioned Socialist Realism, his early texts have been dismissed as both irrelevant and subversive. Many poems from Bazhan’s three remarkable early collections (1926, 1927, and 1929) remain unknown to readers, both in Ukraine and the West. The publication for the first time makes these outstanding works available.

More than fifteen translators and writers joined forces for this massive project, presenting a diverse set of translation techniques and approaches to collaboratively tackle this challenging corpus.

Lev Fridman and Oksana Rosenblum will briefly describe the stages of the project as it grew from a two-person team and a single poem; Halyna Babak will introduce the poetics and mindset of the early Bazhan while Ainsley Morse and Ostap Kin will read a few poems in the original and in their English translation briefly remarking on the process of deciphering them and rendering them into English. Moderated by Mark Andryczyk.

Lev Fridman is a Speech-Language Pathologist based in New York City. He has facilitated translation projects and publications, and his own writings and translations have appeared in Ugly Duckling Presse, Odessa Review and The Café Review.

Oksana Rosenblum is an art historian and translator residing in New York City. Her projects have included visual research for the newly created museums of Jewish History in Warsaw and Moscow. Oksana’s poetry translations from Ukrainian and book reviews appeared in Kalyna Review, National Translation Month, and Versopolis.

Halyna Babak is a scholar and editor in chief of the Czech journal NaVýchod. She received her PhD in Slavic literatures from Charles University, Prague. Her research focuses on Ukrainian and Russian avant-garde literature and Ukrainian interwar literary theory.

Dr. Ainsley Morse is a scholar, teacher, and translator, primarily of Russian and former Yugoslav literatures. Her research focuses on the literature and culture of the postwar Soviet period, particularly unofficial or "underground" poetry, as well as the avant-garde and children's literature. She teaches Russian Language and Russian/Eastern European literature at Dartmouth College.