Columbus: Céline Keating's "Play For Me"

Join us on Friday, May 1st, at 7pm as Céline Keating launches her new book, Play For Me.

It happens without warning: At a folk-rock show at her son's college, Lily becomes transfixed by the guitarist's unassuming onstage presence and beautiful playing and with his final note, something within her breaks loose. After the concert, Lily returns to her comfortable life an Upper West Side apartment, a job as a videographer, and a kind if distracted husband but she can t stop thinking about the music, or about the duo's guitarist, JJ. Unable to resist the pull of either one, she rashly offers to make a film about the band in order to gain a place with them on tour. But when Lily dares to step out from behind her camera, she falls deep into JJ's world upsetting the tenuous balance between him and his bandmate, and filling a chasm of need she didn t know she had. Captivating and provocative, Play for Me captures the thrill and heartbreak of deciding to leave behind what you love to follow what you desire.

Céline Keating is a writer living in New York. Her short fiction has been published in many literary magazines, including Appearances, Echoes, Emry’s Journal, The North Stone Review, Prairie Schooner, and the Santa Clara Review. Céline is an avid student of classical guitar and a regular contributor to Acoustic Guitar and Minor 7th magazines. Her articles have also appeared in Coastal Living, Guitar World, and Poets & Writers magazines. Her debut novel, Layla, was published in 2011. Her new novel, Play for Me is published by She Writes Press. 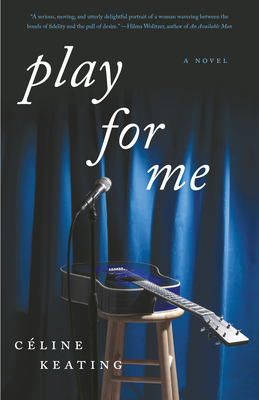