Please join us on Tuesday, July 7th, at 7pm for the launch of Carla Norton's book, What Doesn't Kill Her. Cary Barbor, host of the Books and Authors podcast, will interview Carla for this event.

About What Doesn't Kill Her:

Reeve LeClaire is a college student, dammit, not Daryl Wayne Flint's victim. Not anymore-not when Reeve is finally recovering a life of her own after four years of captivity. Flint is safely locked up in Olshaker Psychiatric Hospital, where he belongs. He is walking the grounds of the forensic unit, performing his strange but apparently harmless rituals. It seems that he is still suffering the effects of the head injury he suffered in the car crash that freed Reeve seven years ago. Post-concussive syndrome, they call it. For all that Flint seems like a model patient, he has long been planning his next move. When the moment arrives, he gets clean away from the hospital before the alarm even sounds. And Reeve is shocked out of her new life by her worst nightmare: Her kidnapper has escaped. Less than 24 hours later, Flint kills someone from his past--and Reeve's blocked memories jolt back into consciousness. As much as she would like to forget him, she knows this criminal better than anyone else. When Flint evades capture, baffling authorities and leaving a bloody trail from the psychiatric lock-up to the forests of Washington state, Reeve suddenly realizes that she is the only one who can stop him.

Reeve is an irresistibly brave and believable heroine in Carla Norton's heart-stopping new thriller, What Doesn't Kill Her, about a young woman who learns to fight back.

Carla Norton is the author of The Edge of Normal, a finalist for an ITW Thriller Award for Best First Novel, and co-author of the #1 New York Times bestseller Perfect Victim, which the FBI put on its Behavioral Sciences Unit reading list. She has twice served as a judge for the Edgar Awards. While she has spent time living in New York, Tokyo, Seattle, and Virginia, she currently resides in California and Florida.

Cary Barbor is a seasoned arts producer who has worked on such public radio shows as WNYC-FM's The Leonard Lopate Show and Studio 360. She hosted her own popular show, BookTalk, on SiriusXM. She has published in New York magazine, Salon.com, and The Huffington Post, among others. 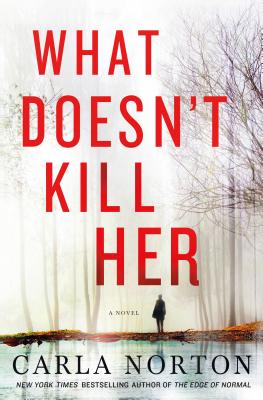