We are currently working with very limited staffing and your patience is greatly appreciated. Thank you!
Event date:
06/05/2019 - 7:00pm 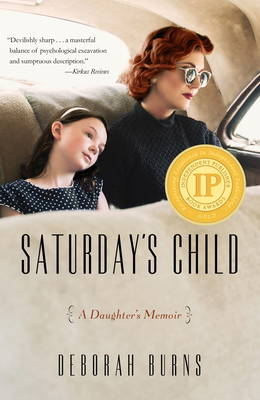 Join us at Book Culture on Columbus as Deborah Burns discusses her new memoir, Saturday's Child: A Daughter's Memoir on Wednesday, June 5th at 7pm! Jamie Brenner, author of Drawing Home, will be joining Deborah in conversation.

"Devilishly sharp... a masterful balance of psychological excavation and sumptuous description." --Kirkus Reviews An only child, Deborah Burns grew up in prim 1950s America in the shadow of her beautiful, unconventional, rule-breaking mother, Dorothy--a red-haired beauty who looked like Rita Hayworth and skirted norms with a style and flare that made her the darling of men and women alike. Married to the son of a renowned Italian family with ties to the underworld, Dorothy fervently eschewed motherhood and domesticity, turning Deborah over to her spinster aunts to raise while she was the star of a vibrant social life. As a child, Deborah revered her charismatic mother, but Dorothy was a woman full of secrets with a troubled past--a mistress of illusion whose love seemed just out of her daughter's grasp. In vivid, lyrical prose, Saturday's Child tells the story of Deborah's eccentric upbringing and her quest in midlife, long after her parents' death, to uncover the truth about her mother and their complex relationship. No longer under the spell of her maternal goddess, but still caught in a wrenching cycle of love and longing, Deborah must finally confront the reality of her mother's legacy--and finally claim her own.

Deborah Burns is a former Chief Innovation Office and brand leader for ELLEgirl, ELLE Décor, Metropolitan Home, and ELLE Global Marketing. Now a media industry consultant, she helps brands, executives, and professional women reinvent themselves through her expertise, coaching process, and website, skirtingtherules.com, which she founded. Beneath her business leader exterior, however, always beat the heart of a writer, and several years ago she began the creative journey to write Saturday’s Child and tell her mother’s story. She lives on Long Island, New York with her husband and their three children.

Jamie Brenner is the author of the national bestseller THE FOREVER SUMMER (Little, Brown). She grew up in suburban Philadelphia on a steady diet of Norma Klein, Judy Blume, and Judith Krantz novels. After studying literature at The George Washington University in Washington, D.C., Jamie moved to New York City where she started her career at HarperCollins Publishers, then later Barnes&Noble.com and Vogue.com before becoming an author. Her new book DRAWING HOME will publish May 7. Jamie lives in New York City with her husband and teenage daughters.