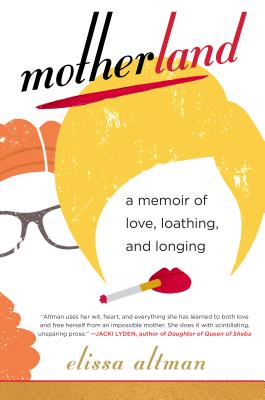 Join us at Book Culture on Columbus on Thursday, August 8th, at 7pm for a discussion with Elissa Altman on her newest book Motherland. Julie Klam will be joining Elissa in conversation.

A richly textured, multilayered story about mothers and daughters, aging and time, loathing and love from the James Beard Award-winning author of the critically acclaimed memoir Poor Man's Feast, the blog of the same name, and the Washington Post column Feeding My Mother.

Elissa and Rita have forever struggled to find their place in each other's worlds. Rita, an overreaching, makeup-addicted, narcissistic Manhattan singer couldn't be more different from Elissa, her gay, taciturn New England writer daughter. Stuck in an outrageous maelstrom of codependency, mother and daughter cannot seem to extricate themselves from the center of each other's lives. Motherland is their universal story: a kaleidoscopic journey built on the ferocity of mother-daughter love, moral obligation, and the possibility and promise of healing.

Having survived a harrowing childhood at the hands of her mother, Elissa is finally settled in Connecticut with her wife of almost twenty years. After much time, therapy, and wine, Elissa is at last in a healthy place, orbiting around her mother, but keeping far enough away from her to preserve the independent, quiet life she has built for herself. All of this is suddenly at risk when Rita, whose days are spent traversing the streets of Manhattan from Bergdorf's to Bloomingdale's and back again, suffers an incapacitating fall that leaves her fully dependent on her only child.

Forced to confront her mother's desperate need for beauty, her view of the world through a medley of men, her lost days in the spotlight, addiction, and the money that has mysteriously disappeared in the name of maintaining her youth, Elissa must navigate the waters of their shared history, obligation, the problems of caregiving and age, and the frenetic, co-dependent love that has defined their obsessive relationship. Motherland asks the universal mother-daughter question: How much love is too much love?

Filled with tenderness, wry irreverence, and unforgettable characters, Motherland is an exploration of what it means to escape from the shackles of the past only to have to face them again, finally, in the name of peace and the fragile mother-daughter bond.

Elissa Altman is the critically acclaimed author of Poor Man's Feast: A Love Story of Comfort, Desire, and the Art of Simple Cooking and the James Beard Award-winning blog of the same name and Treyf: My Life as an Unorthodox Outlaw. Her work has appeared in O, The Oprah Magazine, The Wall Street Journal, The Guardian, The New York Times, Tin House, The Rumpus, Dame Magazine, LitHub, Saveur, and The Washington Post, where her column, Feeding My Mother, ran for a year. Her work has been anthologized in Best Food Writing six times. A finalist for the Frank McCourt Memoir Prize, Altman has taught the craft of memoir at The Fine Arts Workshop in Provincetown, The Loft Literary Center, 1440 Multiversity, Ireland's Literature and Larder Program, and has appeared live on stage at TEDx and The Public, on Heritage Radio, and NPR's The Splendid Table and All Things Considered. She lives in Connecticut with her family.

Julie Klam grew up in Bedford, New York. Don't be confused if you see that her brother, the author Matthew Klam, says he was born in Katonah, New York. Katonah is in the town of Bedford, and she can call it whatever she wants.  After attending NYU's Tisch School of the Arts and interning at Late Night with David Letterman, Julie went on to write for such publications as O: The Oprah Magazine, Rolling Stone, Harper's Bazaar, Glamour, and for the VH1 television show Pop-Up Video, where she earned an Emmy nomination for Outstanding Special Class Writing. Currently she writes for The New York Times, The Washington Post,  and the magazines that haven't folded.  She lives in New York City with her daughter, her Dan Davenport, and a variety of cute dogs.

Motherland: A Memoir of Love, Loathing, and Longing (Hardcover)

The Stars in Our Eyes: The Famous, the Infamous, and Why We Care Way Too Much About Them (Paperback)