We are currently working with very limited staffing and your patience is greatly appreciated. Thank you!
Event date:
10/23/2019 - 7:00pm 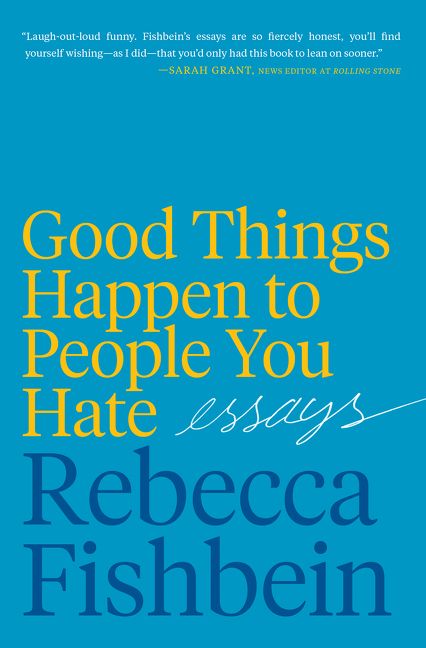 Join us at Book Culture on Columbus on Wednesday, October 23rd at 7pm for the Manhattan launch of Good Things Happen to People You Hate by Rebecca Fishbein. She will be joined in convesation by HuffPost's Emma Gray.

Former Senior Editor for Gothamist Rebecca Fishbein’s adult life has been a dramatic reflection of New York media itself—constantly evolving in unexpected ways and seemingly always on the edge of disaster. In short, Rebecca has seen it all—from 3 bedbug infestations, to being fired, to being yelled at while working at American Apparel, to losing all her stuff in a freak fire, to being bullied online by angry Taylor Swift fans.

But the real humor and meat of the collection come from Rebecca's unwavering honesty and unflinching examination of her struggles with alcohol, anxiety, depression, compulsive lying, female beauty standards, and a slew of failed cowoker/roommate/friend semi-relationships are dark, insightful, and hilarious.

As Jia Tolentino commented, the era of the personal essay ended with the election—this is not your grandmother's millennial essay collection. Rebecca’s writing is relatable without being preachy and conveys a message of resilience by example, not by moral. Readers will recognize the world they themselves see—a disastrous president and a scary socioeconomic landscape—in Becca’s writing and find comfort in her humor and a snarky but incisive friend in her writing.

Rebecca Fishbein is a former senior editor at Gothamist and current writer/prolific Tweeter/television addict. She was born and raised in Manhattan where, at the tender age of two, she ate her first H&H bagel. It’s all been downhill from there. She graduated from the Johns Hopkins University’s Writing Seminars program, and has been published in Baltimore City Paper, Time Out New York, Jezebel, Vice, Splinter, and Adweek, The Cut, Lifehacker, and Curbed NY, among other outlets. She will talk to you endlessly about the HBO show Girls, even though she hates it. She lives in Brooklyn, New York.

Emma Gray is a senior reporter at HuffPost focused on the intersection of gender, culture and politics, and the author A Girl's Guide To Joining The Resistance, a primer on young women and activism. She is also the co-host of the Bachelor-themed podcast, "Here To Make Friends," which was named a must-listen by The Daily Dot, and has appeared as an expert on the Today Show, Good Morning America, MSNBC, Entertainment Tonight, NPR and WBUR. Her work has also appeared in Cosmopolitan, Nylon and Teen Vogue. Emma is based in New York City, and is an alum of McGill University in Montreal, which is probably why she has such a soft spot for poutine and St. Viateur bagels.

A Girl's Guide to Joining the Resistance: A Feminist Handbook on Fighting for Good (Paperback)