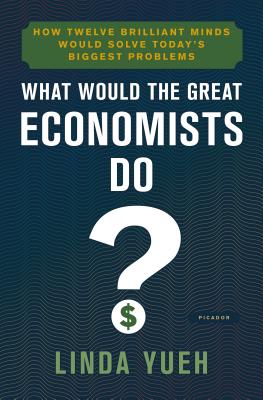 Join us as Harper's Magazine and Book Culture on Columbus present Linda Yueh on her new book What Would the Great Economists Do? on Thursday, June 7th at 7pm!

A timely exploration of the life and work of world-changing thinkers--from Adam Smith to John Maynard Keynes--and how their ideas would solve the great economic problems we face today.

Since the days of Adam Smith, economists have grappled with a series of familiar problems - but often their ideas are hard to digest, even before we try to apply them to today's issues. Linda Yueh is renowned for her combination of erudition, as an accomplished economist herself, and accessibility, as a leading writer and broadcaster in this field. In What Would the Great Economists Do? she explains the key thoughts of history's greatest economists, how our lives have been influenced by their ideas and how they could help us with the policy challenges that we face today.

In the light of current economic problems, and in particular economic growth, Yueh explores the thoughts of economists from Adam Smith and David Ricardo to contemporary academics Douglass North and Robert Solow. Along the way, she asks, for example, what do the ideas of Karl Marx tell us about the likely future for the Chinese economy? How do the ideas of John Maynard Keynes, who argued for government spending to create full employment, help us think about state intervention? And with globalization in trouble, what can we learn about handling Brexit and Trumpism?

Linda Yueh is an economist, broadcast, and author. She holds senior academic positions at Oxford University, London Business School, and the London School of Economics and Political Science. She was an anchor/correspondent at the BBC and Bloomberg TV. Linda is a widely published author and serves as editor of a book series on economic growth and development

What Would the Great Economists Do?: How Twelve Brilliant Minds Would Solve Today's Biggest Problems (Hardcover)