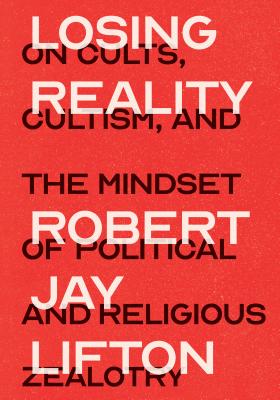 Join Harper’s Magazine, Book Culture on Columbus, and the New Press on Tuesday, October 29th at 7pm for the NYC launch of Robert Jay Lifton’s Losing Reality: On Cults, Cultism, and the Mindset fo Political and Religious Zealotry.

A definitive account of the psychology of zealotry, from a National Book Award winner and a leading authority on the nature of cults, political absolutism, and mind control

In this unique and timely volume Robert Jay Lifton, the National Book Award-winning psychiatrist, historian, and public intellectual proposes a radical idea: that the psychological relationship between extremist political movements and fanatical religious cults may be much closer than anyone thought. Exploring the most extreme manifestations of human zealotry, Lifton highlights an array of leaders--from Mao to Hitler to the Japanese apocalyptic cult leader Shōkō Asahara to Donald Trump--who have sought the control of human minds and the ownership of reality.

Lifton has spent decades exploring psychological extremism. His pioneering concept of the "Eight Deadly Sins" of ideological totalism--originally devised to identify "brainwashing" (or "thought reform") in political movements--has been widely quoted in writings about cults, and embraced by members and former members of religious cults seeking to understand their experiences.

In Losing Reality Lifton makes clear that the apocalyptic impulse--that of destroying the world in order to remake it in purified form--is not limited to religious groups but is prominent in extremist political movements such as Nazism and Chinese Communism, and also in groups surrounding Donald Trump. Lifton applies his concept of "malignant normality" to Trump's efforts to render his destructive falsehoods a routine part of American life. But Lifton sees the human species as capable of "regaining reality" by means of our "protean" psychological capacities and our ethical and political commitments as "witnessing professionals."

Lifton weaves together some of his finest work with extensive new commentary to provide vital understanding of our struggle with mental predators. Losing Reality is a book not only of stunning scholarship, but also of huge relevance for these troubled times.

Robert Jay Lifton has written over twenty books, including many seminal works in the field such as the National Book Award-winning Death in Life: Survivors of Hiroshima and The Nazi Doctors, as well as The Climate Swerve and Losing Reality (both from The New Press). He has taught at Yale University, Harvard University, and the City University of New York. He lives in New York City and Wellfleet, Massachusetts.

Losing Reality: On Cults, Cultism, and the Mindset of Political and Religious Zealotry (Hardcover)