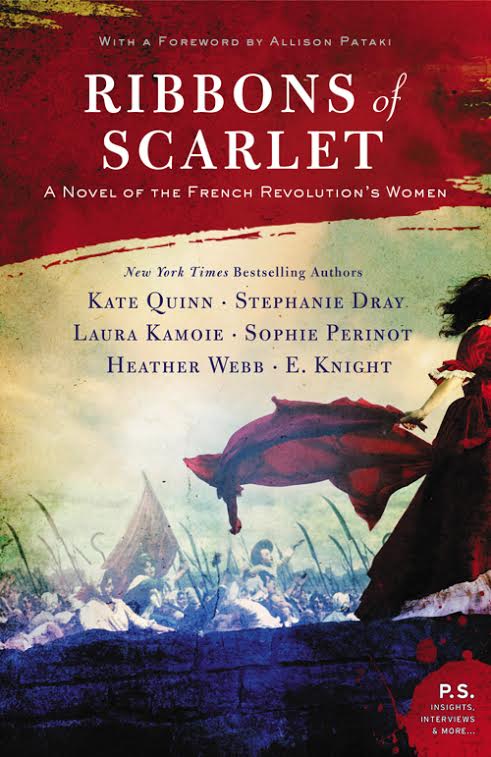 Join us on Thursday, October 3rd at Book Culture on Columbus as we celebrate the release of Ribbons of Scarlet with author Heather Webb.  Allison Pataki will be joining in conversation.

Six bestselling and award-winning authors bring to life a breathtaking epic novel illuminating the hopes, desires, and destinies of princesses and peasants, harlots and wives, fanatics and philosophers—six unforgettable women whose paths cross during one of the most tumultuous and transformative events in history: the French Revolution.

Ribbons of Scarlet is a timely story of the power of women to start a revolution—and change the world.

In late eighteenth-century France, women do not have a place in politics. But as the tide of revolution rises, women from gilded salons to the streets of Paris decide otherwise—upending a world order that has long oppressed them.

Blue-blooded Sophie de Grouchy believes in democracy, education, and equal rights for women, and marries the only man in Paris who agrees. Emboldened to fight the injustices of King Louis XVI, Sophie aims to prove that an educated populace can govern itself--but one of her students, fruit-seller Louise Audu, is hungrier for bread and vengeance than learning. When the Bastille falls and Louise leads a women’s march to Versailles, the monarchy is forced to bend, but not without a fight. The king’s pious sister Princess Elisabeth takes a stand to defend her brother, spirit her family to safety, and restore the old order, even at the risk of her head.

But when fanatics use the newspapers to twist the revolution’s ideals into a new tyranny, even the women who toppled the monarchy are threatened by the guillotine. Putting her faith in the pen, brilliant political wife Manon Roland tries to write a way out of France’s blood-soaked Reign of Terror while pike-bearing Pauline Leon and steely Charlotte Corday embrace violence as the only way to save the nation. With justice corrupted by revenge, all the women must make impossible choices to survive--unless unlikely heroine and courtesan’s daughter Emilie de Sainte-Amaranthe can sway the man who controls France’s fate: the fearsome Robespierre.

Heather Webb is the international bestselling author of six historical novels set in France, including her latest Last Christmas in Paris and the upcoming Meet Me in Monaco, set to the backdrop of Grace Kelly’s wedding, releasing in summer 2019. In 2015, Rodin’s Lover was selected as a Goodreads Top Pick, and in 2018, Last Christmas in Paris became a Globe & Mail bestseller and also won the Women’s Fiction Writers Association STAR Award. To date, Heather’s novels have received national starred reviews, and have been sold in a dozen countries worldwide. When not writing, you may find Heather collecting cookbooks or looking for excuses to travel. She lives in New England with her family and one feisty rabbit.

Allison Pataki is the New York Times Bestselling author of four adult fiction novels, two children's books, one nonfiction memoir, and the forthcoming historical fiction novel The Queen's Fortune, a novel of Desiree Clary and Napoleon. Her books have been translated into more than a dozen languages, and she has also written for The New York Times, The Huffington Post, ABC News, USA Today and other outlets. A member of the Historical Novel Society, Allison graduated Cum Laude from Yale University with a degree in English. She is the mother of two and lives with her husband and family in New York.

Ribbons of Scarlet: A Novel of the French Revolution's Women (Paperback)

Ribbons of Scarlet: A Novel of the French Revolution's Women (Hardcover)

Meet Me in Monaco: A Novel of Grace Kelly's Royal Wedding (Paperback)

The Queen's Fortune: A Novel of Desiree, Napoleon, and the Dynasty That Outlasted the Empire (Hardcover)