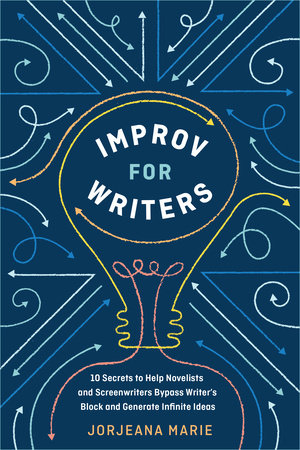 Join us at Book Culture on Columbus on Thursday, September 12th at 7pm to celebrate the release of Improv For Writers: 10 Secrets to Help Novelists and Screenwriters Bypass Writer’s Block and Generate Infinite Ideas. The author, Jorjeana Marie will be joined by poet Kim Dower.

Free yourself from writer’s block and inner critics with the creative power of improv!

“Jorjeana Marie’s generous, joyful, and oh-so-useful book shows writers—both seasoned and new—how to unleash their creativity and find their best story.”—Gayle Forman, New York Times bestselling author of If I Stay and I Have Lost My Way

Improv instructor and writer Jorjeana Marie reveals a new way to generate idea after brilliant idea. Applying the rules of improv to fiction writing, Marie presents fun games and exercises you can do from the comfort of your desk at home.

Surprise yourself with new plots, infinite characters and settings, and a supreme confidence in your own process. Armed with the power of improv—and liberating exercises like Ad Agency, Raise the Stakes, and Family Portraits—you’ll soon be an idea machine. With Improv for Writers, your creative storytelling well will never run dry again.

Jorjeana Marie is an award-winning actress, stand-up comedian, playwright, screenwriter, and improv instructor. She has voiced the biggest video games, popular animated series, and hundreds of audiobooks (winning over a dozen Earphones Awards and a prestigious Audie Award.) Marie tries story concepts for Disney and other animated series and has worked as an improv instructor for Emmy an Oscar-winning actors.