Columbus: Maureen Meister on A Description of the New York Central Park 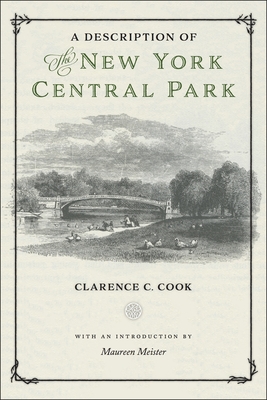 Central Park receives millions of visitors every year, tourists and locals alike. A Description of the New York Central Park, published in 1869, is recognized today as the most important book about the park to appear during its early years. The lively, often wry, text was written by Clarence C. Cook, a distinguished Victorian art critic, while the illustrations were drawn by the popular Albert Fitch Bellows. The author and artist examine many sites in the park that survive to this day as well as features that have vanished over time. In a new Introduction, Maureen Meister reveals how the book came about. In the mid-1860s, the park's designers, Frederick Law Olmsted and Calvert Vaux, were battling to defend their plan. Of greatest concern was a proposal to build ornate entrances, suggestive of French imperialism. If realized, the gates would have undermined the park's natural and democratic image. At the same time, the park was threatened by a proliferation of monuments. Meister tells how Olmsted and Vaux advised Cook on what he wrote, and she has found evidence to suggest that they initiated the book's publication. This book is their book. While the original volume offers much to delight the modern reader, Meister's Introduction sheds light on how the book served a greater purpose. It was published to champion Olmsted and Vaux and to advocate for their vision--a dream for a magnificent public park that has come to be regarded as New York City's achievement and a model for the nation.

Maureen Meister is an art historian who has taught for many years at Boston area universities including Tufts, Lesley, and Northeastern. She is the author of Arts and Crafts Architecture: History and Heritage in New England and Architecture and the Arts and Crafts Movement in Boston: Harvard’s H. Langford Warren; and the editor of H. H. Richardson: The Architect, His Peers, and Their Era.

Clarence C. Cook (1828-1900) was a prominent American author and art critic. Born in Dorchester, Massachusetts, Cook graduated from Harvard in 1849 and settled in New York City. His other titles include The House Beautiful: Essays on Beds and Tables, Stools and Candlesticks and Art and Artists of Our Time.