Columbus: Mort Gerberg on the Scene 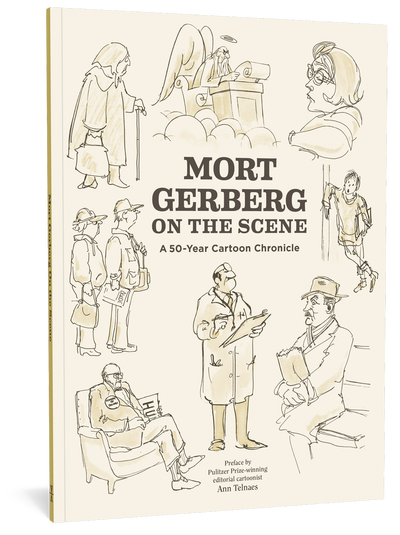 Join us at Book Culture on Columbus on Wednesday, January 30th at 7pm for the launch of Mort Gerberg on the Scene, with The New Yorker's Emma Allen interviewing Mort Gerberg.

Mort Gerberg broke into print with irreverent drawings in The Realist in the early ’60s, whose social-justice-minded—and bitingly funny—cartoons have since appeared in all major magazines, including The New Yorker, Playboy, and the Saturday Evening Post. As a reporter, he’s sketched historic scenes like the fiery Women’s Marches of the ’60s and the infamous ’68 Democratic National Convention.

Above all, Mort Gerberg is a keen political and social observer, whose curiosity, compassion, and razor-sharp wit has informed his work for over 50 years. Fantagraphics Underground is proud to present this handsome career retrospective of Gerberg’s magazine cartoons, sketchbook drawings, and on-the-scene reportage sketches.

Mort Gerberg is an award-winning cartoonist and author best known for his cartoons in The New Yorker, Playboy, and many other magazines, and for his book, Cartooning, The Art and the Business. He has drawn three nationally-syndicated newspaper comic strips and written, edited, and/or illustrated 43 books for adults and children. He taught cartooning for 15 years at New York City’s Parsons School of Design and was a founder and president of the Cartoonists Guild. In 2014, the Library of Congress acquired 79 of Gerberg’s original pen-and-ink drawings for cartoons and reportage published in different venues. Gerberg lives in New York City with his wife.

MORT GERBERG ON THE SCENE (The Fantagraphics Underground Series) (Paperback)