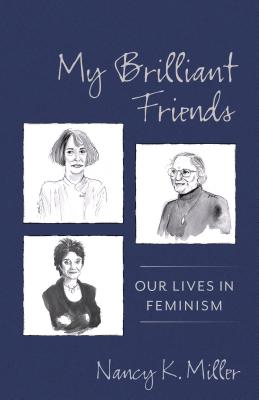 Join us at Book Culture on Columbus on Thursday, February 28th at 7pm for a conversation with Nancy K. Miller and Wayne Koestenbaum as they discuss Miller's new book, My Brilliant Friends.

My Brilliant Friends is a group biography of three women's friendships forged in second-wave feminism. Poignant and politically charged, the book is a captivating personal account of the complexities of women's bonds.

Nancy K. Miller describes her friendships with three well-known scholars and literary critics: Carolyn Heilbrun, Diane Middlebrook, and Naomi Schor. Their relationships were simultaneously intimate and professional, emotional and intellectual, animated by the ferment of the women's movement. Friendships like these sustained the generation of women whose entrance into male-dominated professions is still reshaping American society. The stories of their intertwined lives and books embody feminism's belief in the political importance of personal experience. Reflecting on aging and loss, ambition and rivalry, competition and collaboration, Miller shows why and how friendship's ties matter in the worlds of work and love. Inspired in part by the portraits of the intensely enmeshed lives in Elena Ferrante's Neapolitan novels, My Brilliant Friends provides a passionate and timely vision of friendship between women.

Nancy K. Miller—memoirist and feminist critic—is author and editor of more than a dozen
books, including Getting Personal: Feminist Occasions and Other Autobiographical Acts, But
Enough About Me: Why We Read Other People’s Lives
, as well as the memoirs What They
Saved: Pieces of Jewish Past
(Jewish Journal Prize, 2012), and Breathless: An American Girl in
Paris. She teaches life writing and cultural criticism at the Graduate Center, City University of
New York.

Wayne Koestenbaum—poet, critic, artist, performer—has published nineteen books,
including Notes on Glaze, The Pink Trance Notebooks, My 1980s & Other Essays, Hotel
Theory, Best-Selling Jewish Porn Films, Andy Warhol, Humiliation, Jackie Under My
Skin, and The Queen’s Throat (a National Book Critics Circle Award finalist). His
newest book of poetry, Camp Marmalade, was published in 2018. He has exhibited his
paintings in solo shows at White Columns (New York), 356 Mission (L.A.), and the
University of Kentucky Art Museum. His first piano/vocal record, Lounge Act, was
released by Ugly Duckling Presse Records in 2017; he has given musical performances
at The Kitchen, REDCAT, Centre Pompidou, The Walker Art Center, The Artist’s
Institute, and the Renaissance Society. He is a Distinguished Professor of English,
Comparative Literature, and French at the CUNY Graduate Center in New York City.

My Brilliant Friends: Our Lives in Feminism (Gender and Culture) (Hardcover)