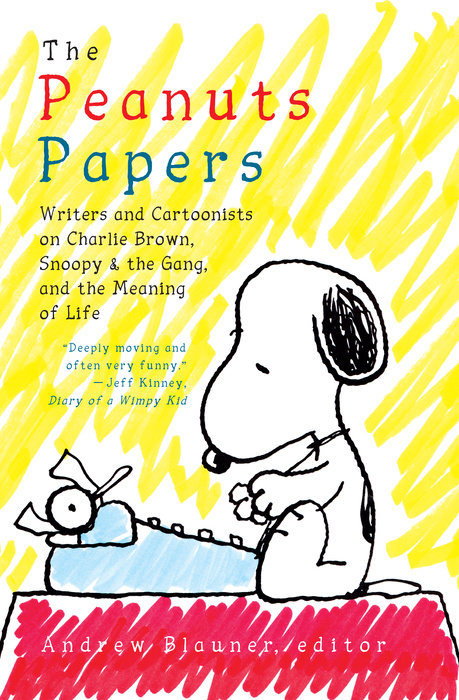 Join Book Culture on Columbus on Thursday, November 14th at 7:30pm to celebrate the recent release of The Peanust Papers: Writers and Cartoonists on Charlie Brown, Snoopy & the Gang, and the Meaning of Life. Editor Andrew Blauner will be joined by contributors Rick Moody, Hilary Fitzgerald Campbell, and Jill Bialosky.

Over the span of fifty years, Charles M. Schulz created a comic strip that is one of the indisputable glories of American popular culture—hilarious, poignant, inimitable. Some twenty years after the last strip appeared, the characters Schulz brought to life in Peanuts continue to resonate with millions of fans, their beguiling four-panel adventures and television escapades offering lessons about happiness, friendship, disappointment, childhood, and life itself.

In The Peanuts Papers, thirty-three writers and artists reflect on the deeper truths of Schulz’s deceptively simple comic, its impact on their lives and art and on the broader culture. These enchanting, affecting, and often quite personal essays show just how much Peanuts means to its many admirers—and the ways it invites us to ponder, in the words of Sarah Boxer, “how to survive and still be a decent human being” in an often bewildering world. Featuring essays, memoirs, poems, and two original comic strips, here is the ultimate reader’s companion for every Peanuts fan.

Rick Moody is the author of six novels, three collections of stories, and three works of nonfiction, most recently the memoir The Long Accomplishment. He writes about music regularly at The Rumpus and teaches writing at Brown University.

Hilary Fitzgerald Campbell  is a Brooklyn-based cartoonist, writer, and documentary filmmaker. Her cartoons have appeared in The New Yorker and the New York Times, among other publications. Campbell has illustrated books such as Are You My Uber? and Feminist Fight Club; her first book of cartoons, Breaking Up Is Hard to Do, But You Could’ve Done Better, was published in 2016. Her films Small Talk and This Is Not the End premiered at festivals across the United States before each becoming a Vimeo Staff Pick. Mashable recently named her one of the top female artists on Instagram.

Jill Bialosky  is the author, most recently, of the memoir Poetry Will Save Your Life. She has published four collections of poetry, most recently The Players; three novels, most recently The Prize; and the memoir History of a Suicide: My Sister’s Unfinished Life. With Helen Schulman, she coedited the anthology Wanting a Child. An Executive Editor and Vice President at W. W. Norton & Company, she was honored by the Poetry Society of America in 2014 for her distinguished contribution to poetry.

Andrew Blauner is the founder of Blauner Books Literary Agency. His other anthologies include Coach, Brothers, Our Boston, Central Park, and In Their Lives: Great Writers on Great Beatles Songs.

The Peanuts Papers: Writers and Cartoonists on Charlie Brown, Snoopy & the Gang, and the Meaning of Life: A Library of America Special Publication (Hardcover)