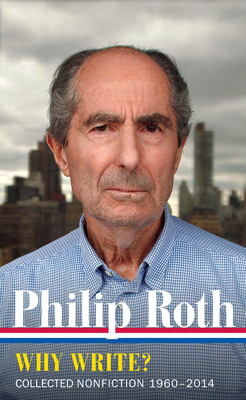 America's most celebrated writer returns with a definitive edition of his essential statements on literature, his controversial novels, and the writing life, including including six pieces published here for the first time and many others newly revised.

Throughout a unparalleled literary career that includes two National Book Awards (Goodbye, Columbus, 1959 and Sabbath's Theater, 1995), the Pulitzer Prize in fiction (American Pastoral, 1997), the National Book Critics Circle Award (The Counterlife, 1986), and the National Humanities Medal (awarded by President Obama in 2011), among many other honors, Philip Roth has produced an extraordinary body of nonfiction writing on a wide range of topics: his own work and that of the writers he admires, the creative process, and the state of American culture. This work is collected for the first time in Why Write?, the tenth and final volume in the Library of America's definitive Philip Roth edition. Here is Roth's selection of the indispensable core of Reading Myself and Others, the entirety of the 2001 book Shop Talk, and "Explanations," a collection of fourteen later pieces brought together here for the first time, six never before published. Among the essays gathered are "My Uchronia," an account of the genesis of The Plot Against America, a novel grounded in the insight that "all the assurances are provisional, even here in a two-hundred-year-old democracy"; "Errata," the unabridged version of the "Open Letter to Wikipedia" published on The New Yorker's website in 2012 to counter the online encyclopedia's egregious errors about his life and work; and "The Ruthless Intimacy of Fiction," a speech delivered on the occasion of his eightieth birthday that celebrates the "refractory way of living" of Sabbath's Theater's Mickey Sabbath. Also included are two lengthy interviews given after Roth's retirement, which take stock of a lifetime of work.

Vivian Gornick's books include Fierce Attachments, Approaching Eye Level, and The End of the Novel of Love, which was a finalist for the National Book Critics Circle Award in 1998. She lives in New York City.

Rick Moody was born in New York City. He attended Brown and Columbia Universities. He is the author of four previous novels: The Four Fingers of Death, Purple America, The Ice Storm and Garden State, as well as an award-winning memoir and multiple collections of short fiction. Moody is the recipient of a Guggenheim fellowship, and his work has been anthologized in Best American Stories, Best American Essays, and the Pushcart Prize anthology. Moody lives in Brooklyn, New York.

Claudia Roth Pierpont is a staff writer for The New Yorker, where she has written about the arts for more than twenty years. She is the author of Roth Unbound: A Writer and His Books, an exploration of the life and work of Philip Roth, and Passionate Minds: Women Rewriting the World, which was nominated for a National Book Critics Circle Award. She lives in New York City.

Daniel Smith is the author of Monkey Mind and Muses, Madmen, and Prophets. His work has appeared in numerous magazines, including The New Yorker,The Atlantic, and The New York Times Magazine. He holds the Critchlow Chair in English at The College of New Rochelle. He lives in Brooklyn, New York.

In 1997, Philip Roth won the Pulitzer Prize for American Pastoral and in 2002 he received the highest award of the American Academy of Arts and Letters, the Gold Medal in Fiction, previously awarded to John Dos Passos, William Faulkner, and Saul Bellow, among others. He has twice won the National Book Award and the National Book Critics Circle Award and the PEN/Faulkner Award three times. His collected works have been published in a definitive ten-volume edition by the Library of America.