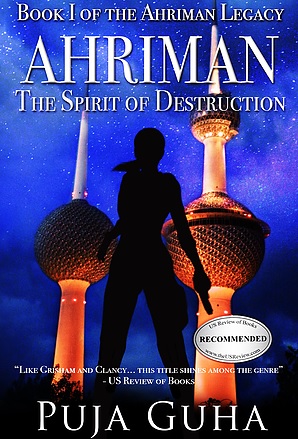 Join us at Book Culture on Columbus on Thursday, August 22nd at 7pm for a reading and talk with Puja Guha, the author behind the The Ahriman Legacy series.

About Book 1, Ahriman: The Spirit of Destruction:
When the CIA intercepts intelligence on a terrorist attack in Kuwait, Petra Shirazi, a former field agent, comes face to face with the Ahriman, a man named for the Persian spirit of destruction, and who is responsible for a series of bomb blasts that paralyzed the Suez Canal two years earlier.
As the investigation begins to unravel, the ripple effects threaten to engulf not only the Middle East and its Western allies, but also the darkest secrets of Petra's past.​

Born into a family of acclaimed Indian architects, Puja Guha traveled with her parents as they worked on projects around the world. After graduating from the University of Pennsylvania, Puja completed her Master's degree in public policy at Sciences Po and the London School of Economics.
Today, she works as an independent consultant on international development programs - primarily in Africa and South Asia - traveling to some of the most economically-challenged countries in the world. Leveraging her scholarship, her ability to speak five languages, and her earnest goal of engendering global economic progress, she continues to learn about, support and embrace new countries. Along her journey, she's been inspired by politics, culture and setting to write the Ahriman Legacy series, in which she takes readers along with her as her imagination enhances her experiences.

Resurgence of the Hunt: A Global Spy Thriller (Paperback)