We are currently working with very limited staffing and your patience is greatly appreciated. Thank you!
Event date:
08/01/2019 - 7:00pm 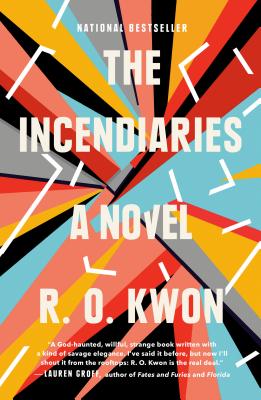 Please join us at Book Culture on Columbus on Thursday, August 1st at 7pm as we welcome R.O. Kwon in celebration of the paperback release of her acclaimed novel, The Incendiaries.  Mira Jacob will be joining in conversation.

"Radiant...A dark, absorbing story of how first love can be as intoxicating and dangerous as religious fundamentalism." --New York Times Book Review

A powerful, darkly glittering novel of violence, love, faith, and loss, as a young woman at an elite American university is drawn into a cult's acts of terrorism.

Phoebe Lin and Will Kendall meet in their first month at prestigious Edwards University. Phoebe is a glamorous girl who doesn't tell anyone she blames herself for her mother's recent death. Will is a misfit scholarship boy who transfers to Edwards from Bible college, waiting tables to get by. What he knows for sure is that he loves Phoebe.

Grieving and guilt-ridden, Phoebe is drawn into a secretive cult founded by a charismatic former student with an enigmatic past. When the group commits a violent act in the name of faith, Will finds himself struggling to confront a new version of the fanaticism he's worked so hard to escape. Haunting and intense, The Incendiaries is a fractured love story that explores what can befall those who lose what they love most.

R.O. Kwon’s nationally bestselling first novel, The Incendiaries, is published by Riverhead, and it is being translated into five languages. Named a best book of the year by over forty publications, it is an American Booksellers Association Indie Next #1 Pick and an Indies Introduce selection. The Incendiaries was a finalist for the National Book Critics Circle John Leonard Award for Best First Book, Los Angeles Times First Book Prize, and Northern California Independent Booksellers Association Fiction Prize. Her writing has appeared in The New York Times, The Guardian, The Paris Review, BuzzFeed, NPR, and elsewhere.

Mira Jacob is the author and illustrator of Good Talk: A Memoir in Conversations. Her critically acclaimed novel, The Sleepwalker’s Guide to Dancing, was a Barnes & Noble Discover New Writers pick, shortlisted for India’s Tata First Literature Award, and longlisted for the Brooklyn Literary Eagles Prize. It was named one of the best books of 2014 by Kirkus Reviews, the Boston Globe, Goodreads, Bustle, and The Millions.  Her writing and drawings have appeared in The New York Times, Electric Literature, Tin House, Literary Hub, Guernica, Vogue, the Telegraph,  and Buzzfeed,  and she has a drawn column on Shondaland.  She currently teaches at The New School, and she is a founding faculty member of the MFA Program at Randolph College. She is the co-founder of Pete’s Reading Series in Brooklyn, where she spent 13 years bringing literary fiction, non-fiction, and poetry to Williamsburg. She lives in Brooklyn with her husband, documentary filmmaker Jed Rothstein, and their son.

The Incendiaries: A Novel (Paperback)