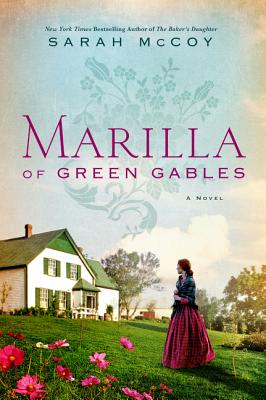 Join us at Book Culture on Columbus as Sarah McCoy reads from her new book Marilla of Green Gables: A Novel on Monday, October 29th at 7pm! New York Times bestselling author Allison Pataki will be joining Sarah in converstion.

A bold, heartfelt tale of life at Green Gables . . . before Anne: A marvelously entertaining and moving historical novel, set in rural Prince Edward Island in the nineteenth century, that imagines the young life of spinster Marilla Cuthbert, and the choices that will open her life to the possibility of heartbreak—and unimaginable greatness.

Plucky and ambitious, Marilla Cuthbert is thirteen years old when her world is turned upside down. Her beloved mother dies in childbirth, and Marilla suddenly must bear the responsibilities of a farm wife: cooking, sewing, keeping house, and overseeing the day-to-day life of Green Gables with her brother, Matthew and father, Hugh.

In Avonlea—a small, tight-knit farming town on a remote island—life holds few options for farm girls. Her one connection to the wider world is Aunt Elizabeth "Izzy" Johnson, her mother’s sister, who managed to escape from Avonlea to the bustling city of St. Catharines. An opinionated spinster, Aunt Izzy’s talent as a seamstress has allowed her to build a thriving business and make her own way in the world.

Emboldened by her aunt, Marilla dares to venture beyond the safety of Green Gables and discovers new friends and new opportunities. Joining the Ladies Aid Society, she raises funds for an orphanage run by the Sisters of Charity in nearby Nova Scotia that secretly serves as a way station for runaway slaves from America. Her budding romance with John Blythe, the charming son of a neighbor, offers her a possibility of future happiness—Marilla is in no rush to trade one farm life for another. She soon finds herself caught up in the dangerous work of politics, and abolition—jeopardizing all she cherishes, including her bond with her dearest John Blythe. Now Marilla must face a reckoning between her dreams of making a difference in the wider world and the small-town reality of life at Green Gables.

Sarah McCoy is the New York Times, USA Today and international bestselling author of the novels The Mapmaker’s Children; The Baker’s Daughter, a 2012 Goodreads Choice Award Nominee; and The Time It Snowed in Puerto Rico. Sarah's work has been featured in Real Simple, The Millions, Your Health Monthly, Huffington Post and other publications. She previously taught English and writing at Old Dominion University and at the University of Texas at El Paso. She currently lives with her husband, an orthopedic sports surgeon, and their dog, Gilly, in North Carolina.

Allison Pataki is the New York Times bestselling author of THE TRAITOR'S WIFE, THE ACCIDENTAL EMPRESS, SISI: EMPRESS ON HER OWN, WHERE THE LIGHT FALLS, and the nonfiction memoir BEAUTY IN THE BROKEN PLACES. She is also the author of two forthcoming children's books, Nelly Takes New York, and Poppy Takes Paris. Allison's novels have been translated into more than a dozen languages and optioned for film. A former news writer and producer, Allison has written for The New York Times, ABC News, The Huffington Post,  and other outlets. Allison graduated Cum Laude from Yale University with a major in English and is a member of the Historical Novel Society. She lives in New York with her husband and children. To learn more and connect with Allison, please visit www.AllisonPataki.com or Twitter @AllisonPataki.