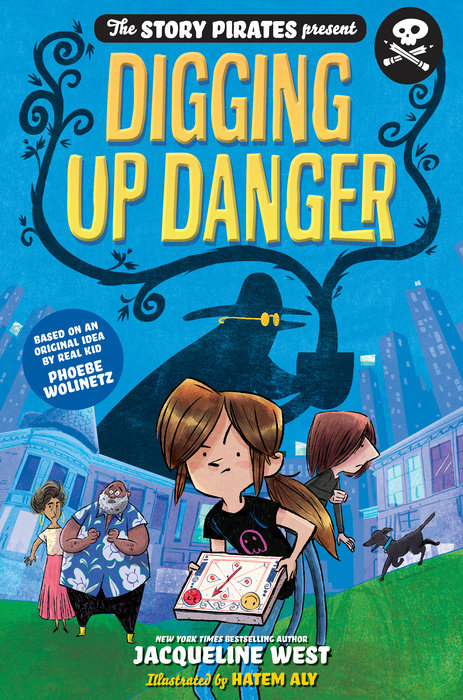 Join Book Culture on Columbus and The Story Pirates on Wednesday, January 23rd at 6:30pm for a dramatic reading of Digging Up Danger, featuring the kid author Phoebe Wolinetz. Story Pirates will also be performing a brand new story, based on ideas from kids in attendance that evening!

Ghosts? A mysterious plant? Something even more sinister? This spooky mystery (inspired by Phoebe's idea) doubles as a creative writing guide for young writers!

Eliza loves hunting ghosts — too bad she's spending the summer helping her scientist mother study weird plants instead.  But when a mysterious plant goes missing, things go from strange to downright spooky. Eliza is convinced something—or someone—is haunting the plant shop. Is she digging into dangerous ground?
Like Stuck in the Stone Age, the first in the Story Pirates Present series, this spine-tingling mystery doubles as an introduction to the basics of creative writing. With the help of Story Pirate Captain Vincent Rolo and the Mystery Creation Zone, kids can use this kid-generated story as inspiration to create their OWN great mysteries!

THE STORY PIRATES are a nationally respected media and education organization founded in 2004 to celebrate the words, ideas, and stories of young people. They've been featured on NBC Nightly News, TODAY, and Sesame Street, and are endorsed by Jon Stewart, Conan O'Brien, John Oliver, and more. Visit storypirates.org for more.

JACQUELINE WEST is an award-winning and bestselling writer for young readers. She lives in Red Wing, Minnesota. Visit jacquelinewest.com for more.

PHOEBE WOLINETZ likes soccer, cooking with her mom and writing fantasy stories.  But her favorite thing at the moment is making slime: sparkly slime, rainbow slime and slime that smells like flowers. She has perfected the recipe.  She lives in New York with her mom, dad, brother, and dog, Webster, who each support her slime-making.*
*Webster is not really into the slime thing.

HATEM ALY is an Egyptian-born illustrator whose work has been featured in publications around the word, including the Newbury Honor Book The Inquisitor’s Tale. Visit metahatem.com for more.

The Story Pirates Present: Stuck in the Stone Age (Hardcover)