Columbus: Swann's Down by Charles Salzberg

We are currently working with very limited staffing and your patience is greatly appreciated. Thank you!
Event date:
06/11/2019 - 7:00pm 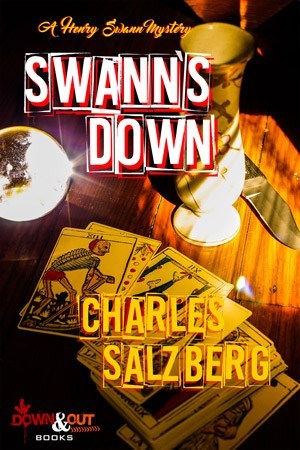 Join us Tuesday, June 11th at 7pm to celebrate the recent release of Swann's Down with the author, Charles Salzberg. He will be joined by author Reed Coleman and tarot card reader Saara Dutton.

When Henry Swann is asked by his quirky partner, Goldblatt, to find a missing psychic who’s swindled his ex-wife out of a small fortune, he just can’t say no. Although he doesn’t actually expect to get paid, he figures it might give him a chance to finally learn more about his partner’s mysterious past. His search takes him into the controversial, arcane world of psychics, fortunetellers, and charlatans, while raising questions in his own mind about whether or not there is an after-life.

While working his partner’s case, he’s approached by a former employer, attorney Paul Rudder, to track down a missing witness who might be able to provide an alibi for his client, Nicky Diamond, a notorious mob hitman who’s scheduled to go on trial in a week for murder he claims he didn’t commit. Swann’s search for the missing witness, who happens to be the defendant’s girlfriend, takes him from Brooklyn to a small beach town across the bay from Mobile, Alabama. But what does she really know and will she even come back with him to testify for her boyfriend?

A celebrated and popular creative writing teacher, Charles Salzberg has been a Visiting Professor at the S.I. Newhouse School of Public Communications at Syracuse University, and has taught writing at Sarah Lawrence College, Hunter College, the Writer’s Voice, and the New York Writers Workshop, where he is a Founding Member. He is a consulting editor at the webzine Ducts.org and co-host, with Jonathan Kravetz, of the reading series, Trumpet Fiction, at KGB in New York City. His freelance work has appeared in such publications as Esquire, New York Magazine, GQ, Elle, Redbook, Ladies Home Journal, The New York Times Arts and Leisure section, The New York Times Book Review, and the Los Angeles Times Book Review.

Called a hard-boiled poet by NPR’s Maureen Corrigan, Reed Farrel Coleman is the New York Times bestselling author of thirty novels including six in the Robert B. Parker Jesse Stone series. He is a four time recipient of the Shamus Award for Best PI Novel of the Year and a four time Edgar Award nominee in three different categories. He is currently writing the prequel novel to Michael Mann’s magnum opus movie Heat.

Saara Dutton is a writer, performer, podcaster, and tarot card reader since the age of 12, when she picked up a tarot deck one summer on Whidbey Island and felt an instant connection. (Then again, she may have just been bored.) Either way, she's been reading them ever since and looks forward to reading yours.