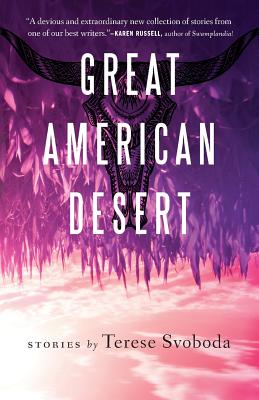 Join Book Culture on Columbus and Guernica Magazine on Wednesday, May 15th at 7pm as we welcome Terese Svoboda to discuss her latest book, Great American Desert. Amy Brady will be joining Terese in conversation.

Water, its use and abuse, trickles through Great American Desert, a story collection by Terese Svoboda that spans the misadventures of the prehistoric Clovis people to the wanderings of a forlorn couple around a pink pyramid in a sci-fi prairie. In “Dutch Joe,” the eponymous hero sees the future from the bottom of a well in the Sandhills, while a woman tries to drag her sister back from insanity in “Dirty Thirties.” In “Bomb Jockey,” a local Romeo disposes of leaky bombs at South Dakota’s army depot, while a family quarrels in “Ogallala Aquifer” as a thousand trucks dump chemical waste from a munitions depot next to their land. Bugs and drugs are devoured in “Alfalfa,” a disc jockey talks her way out of a knifing in “Sally Rides,” and an updated Pied Piper begs parents to reconsider in “The Mountain.” The consequences of the land’s mistreatment is epitomized in the final story by a discovery inside a pink pyramid.

In her arresting and inimitable style, Svoboda’s delicate handling of the complex dynamics of family and self seeps into every sentence of these first-rate short stories about what we do to the world around us—and what it can do to us.

A Guggenheim fellow, Terese Svoboda has published eighteen books of poetry, memoir, biography, a
book of translation from the Nuer, and fiction, most recently Great American Desert, a book of stories
about climate from prehistoric times to the future. In a starred review, Kirkus writes: “[Svoboda's]
enigmatic sentences, elliptical narratives, and percussive plots delve into the possibilities of form, genre,
and plausible futures, but always with an eye on the vast subterranean psychologies of her all-too-real
creations.” Bloomsbury Review claims that &quot;Terese Svoboda is one of those writers you would be
tempted to read regardless of the setting or the period or the plot or even the genre.”

Amy Brady is the Deputy Publisher of Guernica magazine and the Senior Editor of the Chicago Review of Books, where she writes a monthly column about climate fiction. Her writing has appeared in the Los
Angeles Times, Sierra, Pacific Standard, the New Republic, the Village Voice, and elsewhere. She holds a
PhD in literature from the University of Massachusetts Amherst and was a recipient of a CLIR/Mellon
Library of Congress Fellowship.